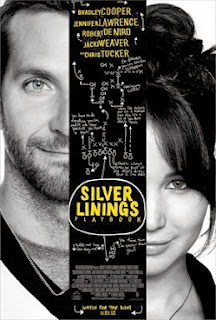 Patrick suffers from bipolar disorder and has just left a facility after treatment. He returns to his home, to live with his father and mother, but has to respect a restraining order because he attacked the lover of his wife Nikki. He meets the young Tiffany who has casual sex with strangers ever since her husband died in an accident. Patrick and Tiffany find a mutual bond because she also suffers from a disorder and rehearse dancing. When his father bets almost his whole fortune with a friend that Patrick and Tiffany will score at least a 5 out of 10 in a dance competition, the couple accepts. They indeed score a 5.0 and fall in love.

Even though it scored a very high critical acclaim, romantic tragicomedy "Silver Linings Playbook" is still a notch below that hype, a good achievement about bipolar disorder, yet a one that allowed that the tone of that neurosis gets spread out over the entire film, evident in numerous scenes that are sometimes more chaotic, messy and 'autistic' than harmonious and measured. However, despite the flaws and lack of humor, two features truly hold up and deserve universal acclaim: veteran actor Robert De Niro as the father and excellent actress Jennifer Lawrence who almost steals the show as the neurotic Tiffany. Her charm is already evident in the first sequence where she meets Patrick when they exchange a witty dialogue ("You look nice." - "Thank you." - "Oh, I'm not flirting with you." - "Oh, I didn't think you were.") In another great little moment, they have a heated argument on the street and she accuses him of harassing her, upon which local youngsters confront Patrick and a police officer even intervenes; seeing he will get in too much trouble, Tiffany steps in and suddenly defends him, telling the police officer that it was "the kids' fault" and that Patrick didn't harass her, claiming that she has a "sick sense of humor", instead. More of that warm moments would have been welcomed, and less those of empty walk of Patrick and Tiffany just dancing or avoiding each other. The characters played by Chris Tucker and Jacki Weaver were sadly "throw away" figures and the dance contest finale was OK, but superfluous and routine. Overall, a good film about two neurotic people balancing it out by being together.