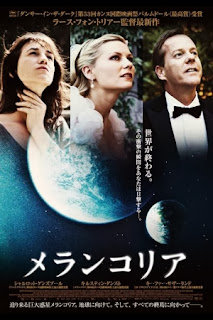 Part one: Justine marries Michael, yet they both arrive two hours late to their wedding reception. The guests are loosing patience, while Justine gets more and more depressed since her mother shuns her, her sister Claire complains about her behavior and Justine's boss about her work. Justine has sex with another man and Michael thus abandons her. Part two: Claire and her husband John take care about Justine in their mansion ever since she became a nervous wreck. Justine recovers, while a rouge planet, Melancholia, is about to cross paths with Earth's orbit. Even though the scientists predicted that Melancholia fly by, it changes course and heads towards Earth. John commits suicide, while Justine calmly makes a "magic cave" where she, Claire and her son Leo will await the end.

With time, director Lars von Trier's character made it more and more difficult to enjoy in his films: how else to describe an author who copes with his depression and repulsion towards society in such a way that he makes a film where he destroys Earth? "Melancholia" is a strange film, to say the least. The first half starts out as a normal drama and plays out exclusively during Justine's wedding: von Trier abandons definitely some rules of Dogme 95, but keeps the hand-held, shaky camera and cuts within frames. Unfortunately, the story has too much empty walk and too little scenes that connect in any way (we are not given that much of a reason why Justine would become depressed on her wedding day, except due to the bitting remarks of her mother and boss) whereas acting giants like John Hurt are wasted on silly scenes of him stealing everyone's spoons on the table.

The second half, that made a step into the science-fiction/ apocalypse genre, is far more engaging, though: probably taking the Nibiru pseudo-myth that was popular in the pre-2012 time, von Trier starts a second story of a rogue planet, Melancholia, that crosses paths with Earth's orbit. Some images there are expressionistic (the night sky showing the white Moon on the left and the blue Melancholia on the right; Claire's son Leo invented a ring that encompasses Melancholia's exact diameter on the sky, Claire waits for five minutes and then points the ring again towards it, and depending on if Melancholia is smaller or larger than the original ring, it is either approaching or distancing Earth) and Kirsten Dunst is strong as the sardonic heroine Justine, yet her character seems forgotten in that second half whereas it is puzzling why all the characters from the opening act (Justine's dad, mother, boss, lover...) are all excluded in part II, which makes this an incomplete disaster film that restricted the apocalyptic storyline only on the four protagonists of Justine, Claire, John and Leo. If anything, the film at least has a catharsic effect - so many human problems seem pale in comparison to this doomsday scenario - but a truly all-encompassing, humane and elaborated work of "planets colliding" was already made 30 years ago with Matsumoto's classic "Queen Millennia".

The movie was very artistic and the cinematography was excellent. The story was kind of boring though, I wrote a review as well on my blog, the fact that von Trier was going through his own depression issues while writing the movie was apparent through the depressing tone of the film. I'm looking forward to seeing Nymphomaniac though, von Trier's latest.