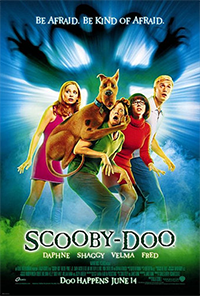 Shaggy, Welma, Fred, Daphne and the huge dog Scooby-Doo are a gang that solves mysteries. After the newest case, where they reveal that a supposed ghost is actually a man in disguise, an argument ensues, among other due to Fred's ego, and the team breaks apart. Some time later, they meet again on the "Spooky Island" in order to investigate strange phenomenons in an amusement park. The monsters are controlled by Scrapy, Scooby-Doos nephew, who wants to rule the world. Scrapy is thus arrested.

With all due respect to the legendary William Hanna and Joseph Barbera, but the animated TV show "Scooby-Doo" was simply an annoying hassle. The jokes were weak whereas the structure of the story constantly repeated itself, without doing anything to advance. The live action adaptation for the big screens is of little to no improvement, due to an "ordered" script and passive direction by Raja Gosnell, though it could also be the case that the producers restrained his more creative-daring side because they did not want anyone to meddle with their franchise. The opening is actually quite good: the heroes reveal a ghost to be just a man in disguise, whereas Pamela Anderson has a neat and surprising cameo there. The best jokes are found in the first half, for instance when the vain Fred reads a book titled "Fred about Fred", which he wrote himself, yet as the time goes by, the storyline seems to be "hijacked" by the typical cheap attempts at appealing the wide audience and the increasingly misguided mood. For instance, the awful duel in farting and belching between Shaggy and Scooby-Doo, the dog Scrapy who transforms into a monster or a machine that steals the people's souls. The watchable grade is sustained only thanks to the sympathetic performance by Velma (interesting Linda Cardellini) who is very good in improvising during problematic situations (the dance sequence), whereas the majority of the audience were interested to see how a live-action version of  Scooby-Doo is going to look like, here embodied entirely thanks to CGI.