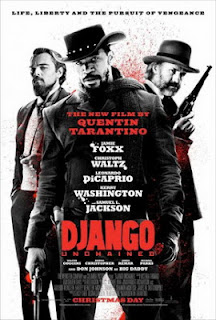 Texas, 19th century. One night, German immigrant, bounty hunter and ex-dentist Schultz frees African-American Django from slavery so that the latter will help him identify the wanted Brittle brothers. Their cooperation continues the whole winter and they are able to kill a lot of outlaws and collect their reward from the Sheriff. In spring, Schultz decides to help Django find his wife Broomhilda, who is held as a slave at the plantation of Mr. Candy. Eventually, Candy sees through their pretext of customers interested in fighting, but sells them Broomhilda for $12,000, anyway. However, Schultz cannot help but to shoot Candy, anyway, so a wild bloodbath ensures. Django in the end frees his wife and blows up the mansion.

After taking on kung-fu movies, exploitation movies and World War II movies, Quentin Tarantino revived another genre, that of a "Spaghetti western", without missing out an opportunity to add something new to it (this time, an African-American is the "main cowboy") but ended up in a too "Hollywoodized" and too polished edition, a step back from his previous film, the stylish "Inglourious Basterds", where he seemed to be getting back into shape. "Django Unchained" is a good film, with strong performances, fine cinematography and the well conceived idea that two minorities - a German and an African-American - help each other in the Wild West, yet the story is overstretched to such an extent that long sequences are less and less accompanied by something inspirational, ending occasionally in artificial story flow, whereas even Tarantino's famous dialogues seem diluted here, tiresome, as if he saved his best ones for another film: except for a neat way Schultz is introduced, it takes some good 45 minutes into the film until a dialogue worthy of a true Tarantino finally shows up, the Ku Klux Klan sequence that degenerates into a genius, hilarious comic quarrel about how the holes on their hoods are too small to see anything. Unfortunately, Tarantino here shows only small crumbs of his virtuosity from the 90s.

Surprisingly, Leonardo DiCaprio's character Candy is completely wasted. The whole character went through the film without causing any reactions. In the scene where he takes the skull from the bag, you think Tarantino is going to make some brilliant Hamlet reference, but it just turns out into a "meh" moment anyone could have written. Even the sequence where Candy exits from the carriage to confront a fighter on a tree, leads to nowhere. Ironically, the actor practically nobody mentioned in the reviews, Samuel L. Jackson, delivered by far the most memorable performance of the entire film, creating a small gem as Stephen. The double bloody finale is anti-climatic precisely because the first finale caused the real climax, and the following 30 minutes where Django goes on to save Broomhilde for the second time was not enthralling because not enough was done to care about their relationship or to anticipate another copy-paste fight. Tarantino can do better than this. References to other movies are fascinating, though, from the snowy shootout ("The Great Silence") up to a small cameo from Franco Nero, the original "Django", standing side by side with the Django from the new generation, Jamie Foxx, ironically remarking how he knows how to pronounce his name. And in the closing credits, the tune from "They Call Me Trinity" can be heard - that is by far the greatest moment of "Unchained": a song from a Spencer-Hill comedy in a Tarantino film.