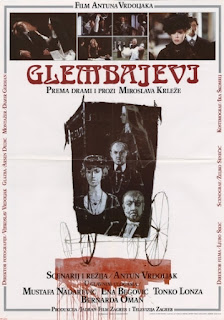 Zagreb, early 20th century. The rick banker Ignjat Glembay (69) married the much younger "baroness" Castelli, in reality an ex-prostitute, and is slowly going to ruins by trying to mend all of her incidents. Recently, she ran over an old lady, who eventually succumbed to her wounds, but Glembay's lawyer came to save Castelli in a trial. After 11 years, Glembay's son Leone, a painter, returns home after a long absence and meets a poor woman, the relative of the deceased lady, who threatens to commit suicide with her baby because she does not have any money. Leone remains neutral and the woman jumps from their castle into the death. Leone starts smearing the Glembays and casually mentions how the local priest, the young Silberbrandt, went to bed with Castelli. That night, Leone clashes with his father, blaming him for not caring for his previous wife and indulging Castelli too much. Ignjat dies from a heart attack. After she discovers that Ignjat actually took money from her, Castelli starts swearing at the whole family, upon which Leone takes scissors and kills her.

Considering that "The Glembays" are often cited as one of the best literary works of writer Miroslav Krleža, and one of the best examples of Croatian literature in the 20th century overall, it was just a matter of time until someone tried to adapt them to the screens, and Antun Vrdoljak's attempt is rightfully seen as appropriate, turning into a well balanced and good movie that gains the most thanks to its strong cast. Even though it plays out only inside one location for almost 90 % of its time - one castle - and spans only 24 hours, the clash between the resigned son Leone and his rich title family encompassed a wide range of dramatic themes that burden society, back then and even today: 'trophy' wife; people falling in love with a person without a heart; a husband dumping his loyal wife for a young mistress; mountains of money thrown to mend and whitewash errors of an irresponsible person; an artist struggling to get out of his family's shadow...

Krleža never shows any of his characters as entirely good or bad - even though the idealistic hero Leone is first to criticize his wealthy family, he is not perfect, either (his passivity when the poor woman with a baby threatens to commit suicide), and the main 'villian', Mrs. Castelli, is actually shown to have a fragile side (her monologe about how she grew up in powerty) - whereas some quotes display remarkable wisdom ("Only a rich nation can be free."; "Can I talk to you as a friend, at least for two minutes?" - "No. You are either a friend, or you are not. You cannot be a friend for two minutes!"). The director's meddling with the source was not too intrusive (casting the young Ena Begic as Mrs. Castelli even gave the story a different layer), not even there where it should have been (with all due respect to Krleža, it would have been fantastic to let Ignjat confront Mrs. Castelli, and not die so sudden), and the cinematography is very moody, which all contribute to a good achievement.