Sailor Moon R the Movie; Promise of the Rose 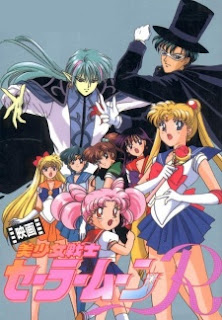 While visiting a botanical garden, petals suddenly fall from the sky and Mamoru meets Fiore, a humanoid alien that comforted him when he was a child and lost his parents. The next day, strange plants turn people into Zombies, but Usagi and the others transform into Sailor Moon and others and stop the process. It turns out that the strange plants are controlled by Fiore, who in turn is controlled by a Xenian Flower. Sailor Moon and the senshi teleport themselves to the asteroid where Fiore is settled and stop him. Fiore wanted to punish humans for letting Mamoru live alone, but stops and finds peace by returning back to space.

The first "Sailor Moon" anime film, "The Promise of the Rose" is considered by most to be the best among the three anime films thanks to the bizarre direction by Kunihiko Ikuhara ("Revolutionary Girl Utena"), a tight script by the series' veteran writer Sukehiro Tomita, great animation and sharp cinematography. However, these critics seem to ignore that the other two movies, "Hearts in Ice" and "Black Dream Hole", are equally as good, just different, which does tend to lead towards concluding that the flaws in "Rose" were ignored while the virtues in "Ice" and "Dream" were unregistered. "Rose" has two irresistible, down to a T perfectly set and executed, tentatively prolonged sequences who seem to act as some sort of comical S. Leone scene whose situations are so juicily set-up that the longer they last the more they make you smile (Usagi closing her eyes and waiting hilariously long for a "delayed" kiss; Chibiusa waking Usagi up after she was knocked unconscious in a restaurant) but works the best while it is situated in the 'slice-of-life" genre, since the second half is just one prolonged battle (of the bizarre), except that its prolonging does not extract magic and spark as the two above mentioned jewels of situations. The problem may lie in the antagonist Fiore, who is just one "guest" bad guy and his base, an asteroid, a slightly too weird location, yet one can find deeper meanings in Carl Jung's psychology, since he is symbolically just Mamoru's Shadow that still wants to take revenge on people for leaving him alone after staying an orphan, which makes the pacifist ending an example of Mamoru's self-realization and personal growth.