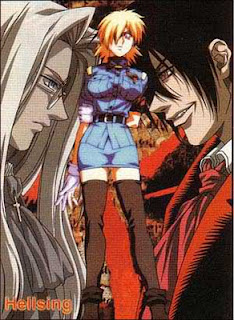 An older gentleman starts kissing a pale woman in his mansion. But he is interrupted by a certain Alucard, a mysterious man in red clothes, who shoots the woman with a silver bullet. The woman disappears because she was a vampire. Alucard himself is a vampire, but works for people in an organization called Hellsing, lead by Lady Integra Hellsing. After a police woman, Seras Victoria, is wounded while taken hostage by a priest ghoul, Alucard saves her by making a vampire out of her. Still confused, Seras now has to get use to sleep in a coffin and eliminate vampires for Hellsing, whether they are vampire brothers, authors of Internet snuff movies or the henchman called Incognito.

The brilliant character of police woman Seras Victoria (voiced by Fumiko Orikasa) completed the tone of the esoteric "Hellsing": this agile-stimulative fantasy-horror anime series manages to present the vampire theme sufficiently in only 13 episodes, but this time in the interesting Hanjian concept where an invincible vampire, dissident Alucard ("Dracula" spelled backwards), actually fights against vampires and is a collaborator with humans, personified in the ironic fact that his master Lady Integra is actually weaker than him. Already the first episode crystallized an eerie mood: among others, Alucard sees the sky in red whereas when his enemies tear his whole body to pieces in the shootout, he just rejuvenates again with ease due to his super-powers. That pilot episode is conventionally suspenseful, but still in the end contains a genius abstract scene that wondered off far into the spheres of anime shrillness: an overweight ghost of a man in a robe floats above the ground and comments the first episode ("No girls, no sex...What a pity!") but then Seras, drawn in comical-caricature manner, shows up and scorns him. The animation is slightly "wooden" at times whereas the original manga remains an untouched ideal (the main plot of the comic-book, revolving around Nazi vampires (!), was "amputated" away from this anime, which was later tried to be corrected with the more faithful "Hellsing Ultimate" OVA 5 years later), but as a whole, this is an unusually aesthetic series, whereas Seras is truly fascinating in scenes where she throws blood into the toilet because since does not want to drink it or fights in her police uniform.

This is one of my favourites animes of all time. Great characters too, from Seras to the butler, to the psychotic religious vampire hunter. Remarkable.

I really enjoyed it, practically all of the four main characters stand out and you cannot say which one is better: Seras, Alucard, the Butler or Integra. The mood is the key to this anime, they simply know how to build it.

Have you also seen the new reboot, Hellsing Ultimate OVA? It is darker, but more faithful to the manga.

Nope, wasn't aware of the existance of that film. I'll try to track it down :D

I enjoyed the movie too, but it's far from the TV series and OVA. Hellsing forever!