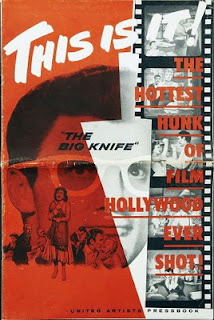 The Big Knife; drama, USA, 1955; D: Robert Aldrich, S: Jack Palance, Ida Lupino, Shelley Winters, Rod Steiger
Charles Castle is a successful actor. One day, he is visited by reporter and friend Patty who inquires when he is going to divorce from his wife Marion, but the latter chases her away from the mansion. Charles, upon Marion's suggestion, does not want to sign a 7 year contract for a studio since he would have to star in bad, cliched movies, but producer Stanley persuades him to sign it anyway, blackmailing him about his car crash accident. After a while, Charles' career starts diminishing while an actress, Dixie, also wants to blackmail him. When Smiley, Stanley's lawyer, suggests Charles to kill Dixie, he starts an argument and renews his relationship with Marion. Charles in the end takes his own life.

Hollywood gained quite a negative reputation in modern times, yet already in 1955, black drama "The Big Knife" made an anti-ode to 'the dream factory' by subtly creating an epitaph to movie art which was replaced by the urge for profit: in this version, a studio boss (excellent Rod Steiger) practically blackmails actor Charles (Palance) to sign a seven year contract for new bad movies since he holds him in his hand by concealing an unfortunate car accident from the public, whereas towards the end the law extension of the movie producers even considers murder to achieve their goal. By bravely showing a situation where a major industry can coax the state system in order to 'audit' circumstances towards their advantage, "Knife" crafted a story full of bitterness and pessimism, which is felt even in dialogues ("All roads lead towards disaster" or "You always do the worst towards people you love the most"), whereas the whole film is almost entirely placed in Charles' mansion, which gives a feeling of static touch. But at the same time the whole thing is also tiresome to watch whereas too much babble reduces the enjoyment value.