A Genius, Two Partners and a Dupe 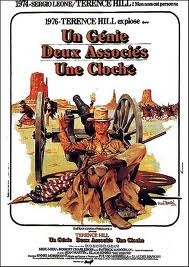 Sneaky Joe Thanks beats Doc Foster in a duel and meets Lucy and Bill who stole silver from the church. In the desert, the trio witness how a stagecoach is attacked by bandits who kill a colonel. Nobody persuades Bill to disguise himself as the colonel and enter the fortress of Major Cabot in order to extract 300,000 $ from him which he withheld from Indians. But Cabot figures out the trick and arrests Bill, while Joe persuades him that gold is hidden on the Indian land. Cabot buys the worthless land and places the Indians in a reservation: he finally figures he was fooled, but Bill and Joe take the 300,000 $ and give to the Indians.

Just as "Fierce Creatures" cannot be considered a sequel to "A Fish Called Wanda", neither can "A Genius, Two Partners and a Dupe" be considered as a direct follow-up to the popular and fun western comedy "My Name is Nobody", but rather as a re-structuring of some of its elements, again featuring Terence Hill as the main star. The whole story about multi-layered double-crossing is just an acronym of all the potential sharpness that it could have built, and some elements are slightly confusing, yet one simply cannot deny that there are many successful jokes in it: especially the well written "duel" between Doc Foster (Klaus Kinski in a short cameo) and Joe (Hill) where the villain shoots at a pipe, causing it to spill water on the hero, but he just shoots his revolver from his hand behind his back. Some moments bother due to their contrived character, but the sense for fun is never lost, such as in the Sheriff's excuse to the arriving colonel due to whistling of cowboys who spotted a lady ("There's been a mistake! The people thought the prostitutes just arrived!" - "It was a mistake, all right, to appoint you as the Sheriff in this town!") and other similar dialogues.