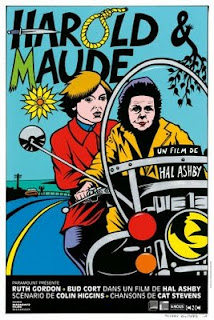 Many teenagers are full of life, but Harold just wants to die. Alas, he fakes his suicides repeatedly: by hanging, drowning in a pool, burning, with artificial blood or a pistol. he even bought a car for undertakers, but his mother is already use to his "caprice" and tries to match him with girls, who often just run away from the house. One day, at a funeral, he meets the old lady Maude (79). Love blossoms between the two people different by age: they talk about flowers and freedom and plant trees in the forest. Maude even saves Harold from his militant uncle Victor, a war veteran. Harold shocks everyone when he announces their engagement. On her 80th birthday, Maude kills herself with pills. Harold is sad and throws a car down the cliff, but realizes she thought him how to have the will to live.

Bizarre black tragicomedy "Harold and Maude" is arguably the most unusual romance of the 20th century - the one between a teenager and a 79-year old lady! Even though it is not one of his best (or for that matter, surest) films, director Hal Ashby blends the most extravagant, untypical themes together - the existentialist young generation that wants to die and the optimistic old generation full of life who teaches them to live with pure joy (and then pass the lesson to the next generation) - to such an extent that this small cult classic impresses easily even today through its freshness and quiet mood, achieving the highlight when Harold and Maude land in bed: that one scene is at the same time grotesque, funny and touching. The songs by Cat Stevens elevate the soundtrack, Ashby doesn't miss the opportunity to make fun of the military circles and the establishment whereas he shows that the 'hippie' spark can exist at any age, various jokes are very comical (a psychologist says this to the hero: "Some sons want to sleep with their mothers. You on the other hand want to sleep with you grandmother.") but the spasmodic fake suicide sequences by Harold do tend be irritating and too grotesque, making the character seem as if he is a caricature that came from 'The Addams Family', despite all the later explenations where Maude teaches him to channel his rebellion into something meaningful and positive. Actors Bud Cort and Ruth Gordon were both nominated for a Golden Globe.