Tears of the Black Tiger 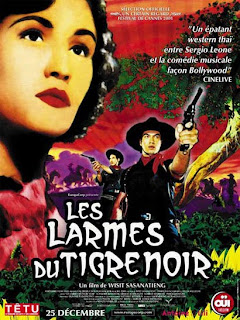 The young Dum first met Rumpoey, the daughter of a rich aristocrat, while he was still a little child and saved her from drowning in a river. When the evil Kong killed his father, Dum joined the gang of the Thai criminal Fai, receiving the nickname "Black Tiger". Mahesuan, who is also a member of the same gang, becomes his friend. When the gang captures a policeman, Dum sets him free since he is engaged to Rumpoey. On the wedding, the gang attacks the policeman, but Fai gets murdered. In a commotion, Dum is shot and killed by the policeman.

Asians as cowboys in a western? That paradigm was invented and executed by Thai director Wisit Sasanatieng who placed it in his fun cult comedy "Tears of the Black Tiger" that doesn't only spoof that genre but also romance and melodrama, which is why such scenes like the one where a cowboy shoots with a bazooka seem completely normal here. The best part is the first third that is almost virtuoso and rich with bizarreness (water drops are falling from a hole on the roof, but suddenly a pipe of a pistol emerges from the darkness, revealing it to be actually the source of the leak; Dum challenges a criminal to a duel but suddenly shoots a snake behind him so he thanks him for saving his life...) which all somehow tickle the imagination, yet the later flow of the story lost that wittiness and subtle hilarious touch, turning into a soap opera which is just a tiny bit overstretched.