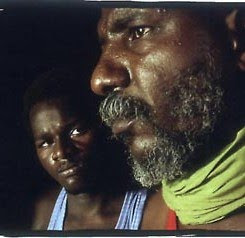 After the decades long civil war has ended in Chad, the government announces on radio that it will grant general amnesty to warlords to avoid any further unrest. Teenager Atim never met his father who was killed before his birth in the conflict by Nassara. Thus, Atim's grandfather persuades him to find and kill him personally. Hitchhiking, Atim arrives at a town, where he is attacked by two soldiers for urinating on the wall, but is saved by stranger Moussa. After some time, Atim finds Nassara, now married to Aicha and running a bakery. The oblivious Nassara gives him a job as a baker, puzzled by his twitchy mood towards him. Still, Nassara regards him as his son and Atim as his father he never had. He brings him to his grandfather, but since he is blind, Atim shoots in the air and makes him believe he killed Nassara.

Movies from Chad are so rare that it's much more precious to watch them when you get a chance than your run-of-the-mill mainstream film you get to see daily. Mahamat Saleh Haroun's „Daratt“, one of only 20 Chad films shot to date, again shows what a huge difference there is between the cinema of the West and the East: it's minimalistic magic, an unassuming and humble little film patiently building a simple „double-family“ story about a teenager, Atim, who is suppose to take revenge on Nassara, the murderer of his father, but the awakening of humanity and fatherly feelings towards him makes the task complicated. In a time where so many films outside the US are trying to look „Americanized“ as much as possible, „Daratt“ seems so refreshing precisely because it is so faithful to the culture and mentality of its own country, showing long panorama shots of Chadian desert, forests, cities and of course people, whereas small episodes where the influence from the West does show up (mobile phones, a disco…) seem unwanted, as if the story captured some essence of the African culture. One must have an almost different mindset in order to watch such introverted and intimate films like „Daratt“, though directors like Jarmusch, Kiarostami, Kaurismaki and others have already set the tone for the latter. Slow and calm, with many symbolic moments that are difficult to comprehend (after he injured his back, Nassara is lying on the bed and asks Atim to give him a massage. Atim though gives him a very „aggressive“ massage, to the point that it hurts Nassara who turns and looks at him strictly; Atim baking a poor bread which Nassara tastes and then spits out…), „Daratt“ is a film with a soul, whereas the ending is a real surprise, showing how even when one has only two options, some people can still find their own way.