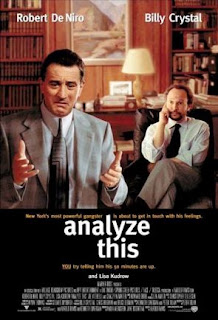 In the 50s, the first ever American mafia summit was interrupted by the police. In present day New York, a second summit is planned and mobster Paul Vitti, whose father was killed in front of his eyes and he could not have prevented it, is expected to attend. But Paul suddenly starts crying and not sleeping with women anymore, fearing for his reputation. When psychiatrist Ben accidentally hits his limousine with his car, Paul hires him to analyze his psychological problems. He makes progress, but annoys Ben who is getting ready for a wedding. When Paul leaves the mafia, Ben has to replace him at the summit. Paul is arrested and Ben is suppose to continue the therapy in prison.

Grossing over 100 million $ at the US box office, "Analyze This" became the biggest Robert De Niro hit until date, which prompted him to switch to comic roles more often, achieving even bigger hits ("Meet the Parents" and its sequel "Meet the Fockers"), yet the sole story could have been written in a funnier manner, not this standard way where the viewers have to be permissive in order to enjoy it on a higher level, whereas the joggling act with crime and serious violence ended up feeling heavy handed at times for a comedy film. Still, the conversations between Paul Vitti and his psychiatrist, excellent Billy Crystal, are amusing, creating an unusual concept of a mobster going on therapy, though a few more brilliant solutions would have been welcomed. Comedy veteran and Director Harold Ramis - who coincidentally also helped write the script - still has some spark for a good comic timing here and there, yet one could complain that he directs it solidly, but ordinary, without any depth for characters, just like his funnier, but also quite conventional comedy "National Lampoon's Vacation". Still, "Analyze This" is a good film, better than the sequel, while it was nominated for 2 Golden Globes - best Motion Picture - Musical or Comedy and best Actor in a Musical or Comedy (De Niro).