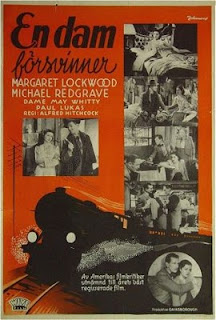 The Lady Vanishes; Thriller comedy, UK, 1938; D: Alfred Hitchcock, S: Margaret Lockwood, Michael Redgrave, Paul Lukas, Dame May Whitty, Basil Radford, Naunton Wayne
A train station in some middle European country. Due to an avalanche, numerous passengers have to stay overnight at a hotel, among them cricket fans Charters and Caldicott, Todhunter and his mistress, musicologist Gilbert as well as Iris who makes friends with the old lady Miss Froy. The next morning, they all board a train to London. After waking up, Iris notices that Miss Froy has disappeared, but to her surprise nobody of the passengers seems to remember she was even on the train at all. Dr. Hartz tries to persuade her that Miss Froy was just a pigment of her imagination. But Iris and Gilbert find clues that prove otherwise – it turns out Miss Froy is a spy and Dr. Hartz was in on the conspiracy, sedating her in order to question her. The evil henchmen start a siege of their wagon, but Gilbert manages to start the train and bring them across the border.

After thriller “Flightplan” told a tight story about the disappearance of a person on a plane but nobody of the passengers wanted to believe the main heroine, many critics immediately pointed out to the original, Alfred Hitchcock’s famous film “The Lady Vanishes” that has a better reputation, but truth be told, it isn’t really that good. Surprisingly, “Flightplan” is actually a more Hitchcockian movie than Hitchcock’s “Lady”, which is a light mystery comedy without intense suspense and equipped with unconvincing-silly moments (the bad guy who is standing “half-unconscious”, so Iris tells Gilbert to hit him one more time). The exposition at the hotel, where all the passengers are waiting for the train the next morning, is humorous and amusing, yet rather unnecessary (the best bits are one involving the two comic characters Charters and Caldicott, who are forced to share a bed together, and, hilariously, even one pajama) compared to the main mood in the train, where the whole story should have been placed right from the start.
The idea about bad guys from a fictional European state that talk some imaginary language isn’t that half bad, yet the tangle revolving around Iris trying to find the disappeared old lady, Miss Froy, isn’t that gripping since it is shaky and lacks focus and those ‘right’ scenes that glue the viewer to the screen. Hitchcock demonstrated his inspired Hitchcockian touch only in the flawless last third of the film that accelerates the story to full speed, brilliantly blending uncertainty (the scene where the bad guy wants Iris and Gilbert to drink their poisonous drinks) and humorous scenes (the smashing-hilarious moment where the armed henchmen stop the wagon in the forest, but Charters still doesn’t want to believe Gilbert’s “conspiracy theory” so he decides to check it out for himself: he goes to the wagon’s door, the henchman shoots him, he goes back inside. Completely calm, with a wounded hand, he just says: “You were right” and then just takes a handkerchief to cover his hand). Still, it’s a good and well done film that even won the New York Film critics Circle Award for best director.
Grade:++
Posted by Marin Mandir at 6:37 PM