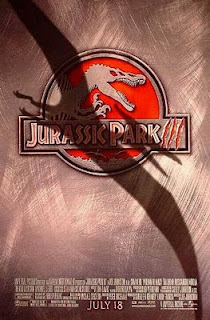 Paleontologist Dr. Alan Grant got married and now has kids, but still digs for the remains of the dinosaur bones, even though his funding is diminishing. He thus accepts the offer of stranger Paul and his wife Amanda to be their guide on island Isla Sorne, where the cloned dinosaurs are still living, in exchange for a financial assistance. Dinosaur meat-eaters eat several crew members of the expedition, but Alan finds their boy and saves him together with his parents when the army arrives.

After the excellent original the "Jurassic Park" series was continued with unworthy sequels that just promoted cheap action in order to quickly cash in some buck. Part III managed to bring back the main protagonist from the 1st film, Sam Neill, yet the story still seems contrived, just as an excuse to show the exciting dinosaurs again on the screen - for instance, it is not clear why his character insists on digging the dinosaur fossils when he could actually observe living dinosaurs on that island, whereas Laura Dern as his wife has a thin cameo appearance that lasts for only 5 minutes. The arrival of the protagonists on the island was accompanied with banal violence - a hunter is waving towards them, signaling them to pick him up, but the pilot does not want to stop from fear. Suddenly, an Allosaurus shows up from a bush and eats the hunter, so the airplane collides with the lizard, creating blood on the windows. The finale is equally unconvincing, where Velociraptors surround the heroes but let them go when they return their eggs. Still, one should not criticize too much. The presence of charismatic dinosaurs last for over 20 minutes in the film whereas some of their sequences are spectacular.