Trinity Is STILL My Name! 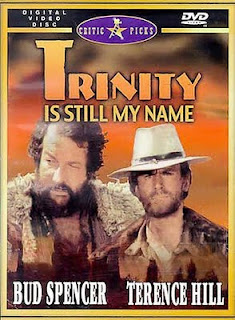 Overweight "Bambino" stumbles into bandits somewhere in the desert and robs them, taking also their horses with him. His brother Trinity also stumbles onto the same bandits and eats their whole beans. Bambino and Trinity accidentally meet in the house of their mother and promise their father on his death bed that they will rob together. But already their first attempt backfires: not only do they not rob a family in a carriage, but give them some money out of pity. In a town, they beat the unbeatable card player while gangster Parker mistakes them for government agents and gives them a 4,000 $ bribe to leave him alone during his arms smuggle. They, of course, cannot allow such thing and capture Parker and his bandits in a monastery, beat them up and call the authorities.

After the acclaimed and highly popular cult comedy "My Name Is Trinity", that back in '70 already set up the whole Bud Spencer/ Terence Hill comic formula and started an unstoppable campaign at the Italian box office, their often director E.B. Clucher made this sequel with them which was also received well, but is of a somewhat weaker quality, proving again that it is hard to repeat something twice and expect an equally strong reaction just like the first time. Some funny jokes really do shine, however, because of their authentic charm - one is the unknown legend moment where Trinity is so fast that he is able to draw his gun, holster it and then slap another gunfighter before the other one can even get the chance to move his arm, which is an indestructible blend of 'cool' and comedy.

Other jokes are also well made, if not brilliant as well (for instance, Trinity draws his gun and shoots at some bandit's cigarette, thereby lighting it, while Bambino shoots right afterwards in order to extinguish it; the comical dialogue between Trinity-Bambino and the monks: "Why did you beat people up?" - "It wasn't us. It was... Lucifer!" - "Lucifer? I don't know him." - "Must be some bandit from the East." - "If you meet him, tell him to go to hell!"). Undoubtedly great scenes, even though the previous film has more highlights, whereas the slightly chaotic-episodic story takes all until the last third to manifest itself completely, whereas in the previous film the structure of the storyline was so tight that we knew right from the start what was going on, which did not allow for the narrative to go into four subplots like here. For the majority of the viewers, the only thing worth waiting for is the comic Hill-Spencer trademark "fist-fighting", which encapsulates three sequences, and thanks to the intelligent supporting writing, here it even does not seem like a 'guilty pleasure'.