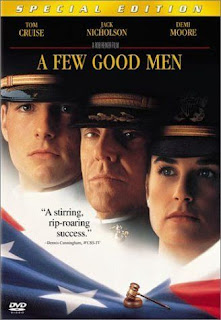 Two US Marines are charged for murder if their colleague Santiago due to too violent mistreatment at Guantanamo Bay Base in Cuba. Santiago previously requested his re-location from the base several times, but not only did he not get it, but he also attracted the rage of Colonel Jessup, who is accused of ordering the harsh treatment. With an apple in his mouth lawyer Kaffee comes into the office of Naval Investigator JoAnne Dalloway. Together, they try to defend the two soldiers on trial. They manage to trick Jessup and have him arrested.

"A Few Good Men" still stands the test of time and seems fresh and energetic despite the formulaic story. It seem obvious that director Rob Reiner was fascinated with off stage games in the military and juridical system and he managed to excellently transport it on the big screen, making it suspenseful and intelligent until the end. Most of the cynical one-liners were collected by Jack Nicholson's character Jessup whose outstanding presence and charisma make him seem like a really important protagonist, even though he appears in only 4 sequences throughout the entire film: his comments about Santiago's numerous written requests for getting transferred off the base ("He wrote a letter to everyone except Santa Clause") or the classic "You can't handle the truth!" line are great and really transmit passion. A very polished and solid trial film, but unfortunately crafted mechanically perfect, while the soul of the film was left out, as well as for some deeper layers, the naive end and, occasionally, Tom Cruise with his baseball bat. Still, the film has sparks and they cannot be denied.