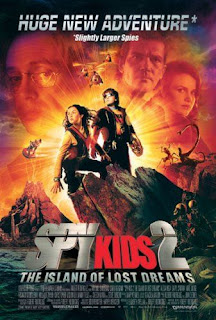 The daughter of the president climbs up on a huge juggling machine in a amusement park, so spy kids Carmen and Juni are summoned to help, yet spy kids Gary and Gerti beat them to the chase. Thus, their father becomes the president of OSS, and not Gregorio, Carmen and Juni's dad. But then an UFO kidnaps Transmooker, a radar invisibility device, so Gary and Gerti get the assignment to get it back, not knowing that their father is actually the bad guy and the traitor to OSS. Carmen and Juni come to the island of Dr. Romaro, who created various monsters there and now hides from them, yet decides to help the spies. Ingrid also has to bring along grandpa and grandma, while Gregorio and his kids capture the OSS boss.

The sequel to the dynamic, but distorted original isn't unfortunately in no way an improvement - grotesque humor, bizarre characters - yet it's still an easily watchable film. Robert Rodriguez went a little bit overboard with rubbish: an amusement park has wild rides so its owner has an umbrella to protect him from visitors throwing up, as well as various trashy monsters that were created by Steve Buscemi's character Dr. Romero ("Why do they despise me? Why, I created them!"), like lizard-snake, pig-cow or spider-cyclops. Still, despite the fact that it seems that Rodriguez only thinks that he can create children's stories if he writes really stupid stuff, "Spy Kids 2" have some inexplicable charm and are never boring. The cohesive structure was strengthened by the homage to the "Argonauts" in the sequence in which the kids are fighting with skeletons until Juni returns their necklace so they stop, while among neat ideas was grandpa (Montalban) in a flying wheelchair or bodyguards who dance around the daughter of the president, whereas Alexa Vega is great, which is why the film isn't such a big setback.