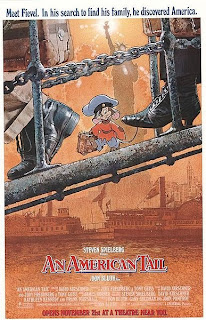 19th Century. Feivel is a small mouse of the poor Russian Mousekewitz family who decides to immigrate to the USA because it hopes for a better life where there are no cats. On a ship traveling across the Atlantic Ocean, the storm flushes Feivel away. Arriving in America, his father loses any hope of seeing him alive again, though his sister Tanya still has high hopes. Feivel indeed manages to arrive in America alive and well and starts searching for his family, becoming friends with cat Tony. The mice build a giant scarecrow like contraption that scares off all cats. And Feivel finds his family again.

When a children's film becomes a hit, it doesn't necessarily mean it was automatically liked by children, since they didn't go alone but were brought by their parents. "An American Tail" is by far a weak film, yet so much more could have been made out of it when one has in mind that it was directed by the animation master Don Bluth who, in cooperation with Spielberg, crafted a much more kids friendly film than his dark debut "NIMH" 4 years ago. The story juggles cleverly and symbolically with the Mice family immigrating from a Russian province to the US where "there are no cats", allegorically speaking about pogrom and Jewish immigration to the US hoping to get away from Anti-semitism, yet, even though it won't become boring, that animated tragic fable is somehow uneven due to anxiety and sentimental scenes which are abundant: the worst is the clumsy account of Feivel's separation from his parents. The best part may just be the for the Oscar nominated music and painstakingly detailed animation, which is why, despite the overblown characters and syrupy emotions, the film has weight.