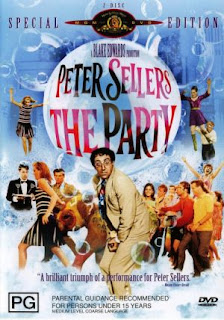 Hindu Hrundi V. Bakshi came all the way from Asia to star in a movie in the US. But during the filming he accidentally activates the explosion too early which destroys the castle on the set and thus ruins the scene, so the director promises him he will never find work on film again. But Bakshi accidentally gets an invitation to a party in the mansion of the producer Cutterbucks. He attends it and, clumsy as he is, creates utter chaos: he ruins the toilet, loses a shoe, ruins a dinner and fills the mansion with foam while trying to wash an elephant. But he meets and makes friends with the unsuccessful actress, Michele.

With movies like "The Party" everything is simple: if you loved "Mr. Bean", you will love this film as well. If you didn't love "Mr. Bean", you won't love this film either. The improvised story based on a thin 50-page screenplay resulted in a overstretched, but fun physical slapstick comedy that doesn't offer more than a few hilarious and a few of forced gags. Blake Edwards knew how to make excellent comedies, like "Victor/Victoria" or "What Did You Do in the War, Daddy?", but also real hassles of a film, yet luckily "The Party" is closer to the first, though not much. Peter Sellers is great in the leading role and tries his best in this, his only collaboration with Edwards outside the "Pink Panther" series, and thus some of the situations are irresistibly hilarious - like the one where his character Bakshi fiddles with some buttons, not knowing they are remote controls for some parts of the mansion, causing an exotic oven to wildly ignite and burn some man's butt, or when he has to urinate but suddenly enters the room where Michele is playing on her guitar, so he politely just stays there, smiling, leaning on the wall, while his legs are nervously moving up-and-down trying to imitate that he isn't in a hurry, in probably the funniest sequence of the film - and the rhythm is good, yet as a whole the movie seems arbitrarily, especially in the second half. Still, as a whole, it's a pleasant surprise, a nice, little and unassuming little comedy that can lift the good mood.