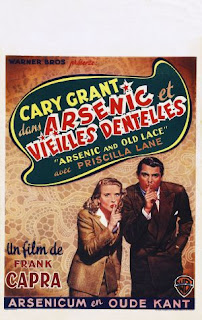 Brooklyn. Play critic Mortimer Brewster is getting married to Elaine and runs away from the reporters. Later on he settles in the house of his aunts Abby and Martha who live with his crazy brother who thinks he is Roosevelt. But Mortimer discovers a corpse in a window seat so his aunts reveal him they poison lonely old people to rid them of their misery and that they have a total of 11 corpses in their basement. Then Mortimer's criminal brother Jonathan shows up with his colleague Einstein with another corpse. Mortimer wants to inform the police, so Jonathan ties him up to a chair, but just then the officers show up and arrest him. A mental asylum medic takes Martha and Abby away because they claim to have corpses while Mortimer discovers he was adopted.

In between his many gentle comedies, humane director Frank Capra shot this black comedy that's untypically morbid for his opus, but quite refreshing. Based on a play, the movie has some kind of an excellent humorous timing, like when Cary Grant's character discovers a corpse in a window seat of his aunts and becomes so petrified from fear he can't even whistle right to his wife or when the old ladies become increasingly impatient when an old man constantly approaches and then distances the vine with Arsenic in it. In the second half, though, the balance is lost and the story becomes rather chaotic and "rough". True, the hilariously stiff Raymond Massey shows up in the second half (in the best "introduction" scene of any character of all the Capra movies, just when Abby wants to show Martha the corpse, he shows up and shifts the curtains from the window, telling: "I'm bringing in the luggage through the window!") but it doesn't have anything to do anymore with the naughty aunts. Maybe the movie does become rather forced and overstretched at times, but it still has enough cynical humor to stay fresh even today.