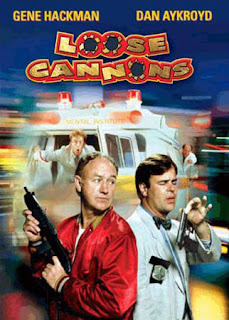 Old police veteran MacArthur Stern gets a new partner, Ellis, recently released maniac who has a numerous split personalities - Alf, Popeye, Captain Kirk...They get the assignment to resolve the murder connected with the only pornographic movie starring Adolf Hitler that is tracked by some Nazi agents. Stern and Ellis protect the overweight Gutterman. On their journey there are going to be a lot of corpses, but they will manage to save him.

"Loose Cannons" is a wacky comedy with dignified performances by Gene Hackman and his partner Dan Aykroyd - combined with the uneven Dom DeLuise - but suffers from a horribly confusing story where the main plot device is foolish (search for a porno movie staring Adolf Hitler), but the numerous events built around it are sometimes too serious, since some of the graphic murders could cause the viewers expecting a light comedy to get "burned". Of course, the overall impression is thus distorted, yet some of the critics who dismissed it as a catastrophe are rather exaggerating it. After all, despite the terrible execution, the movie doesn't contain vulgarity, some action sequences like shooting with both hands are reminiscent of "Desperado" while the getaway of the heroes in a van is childish and irresistible. It's remains a mystery why Hackman and Aykyrod agreed to star in this weak film, but they managed to somewhat improve it.