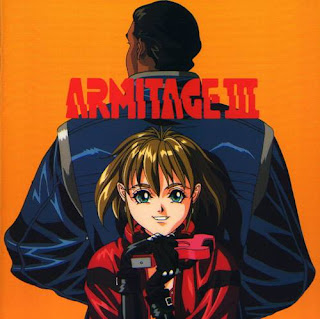 The 22nd Century: Police officer Sylibus Ross arrives to Mars and immediately becomes a witness of a clash between the young agent Armitage and some criminals who leave a suitcase where the police find the corpse of the Country singer Kelly. But there's an even bigger shock: Kelly was an android. Ross quickly discovers that even Armitage is an android, a so called "Third", but still falls in love with her. The androids are attacked by racist Rene D'anclaude because female anroids can have babies, but Armitage throws him with his vehicle down the sever. Due to injuries, Ross gains new body parts and discovers that the government of Mars is lying to their people and secretly wants to destroy androids. Ross and Armitage spend the night together and start a battle with the soldiers. Months later Armitage is pregnant.

A masterful anime for grown ups—whether it is in the OVA form or the slightly shorter film edition—"Armitage III" performs miracles with its minimalistic budget: thanks to director Hiroyuki Ochi's skills, the story about racism, xenophobia and understanding of different societies transported in the future seems authentic and honest, enough, actually, to act original even though it is just a recycling from many other movies handling the relationship between humans and androids, "true" and "artificial" emotions, especially "Blade Runner". Maybe it may seem obnoxious, but it is a clone that is just as good as the original. Just like "Runner", the main protagonist here is also troubled by the fact that he cannot distinguish androids from real humans, but even though he hates machines, he slowly starts accepting them and their nature, even physically, since some of his body parts have to be replaced with mechanical prosthetics after injuries. D'anclaude's persecution and irrational hate towards androids mirrors numerous examples of ethnic exclusion and ultra-nationalism, and leads to a fascinating sequence where he is later shown in a completely timid, pacificsr version, implying that any extremist has potential to be a normal, decent person if his/her extremism is suddenly "switched off".

The main highlight, though, is the heroine Armitage III who is a fascinating character: she is at first presented as a cheerful person and in the start tries to captures some sympathies from Ross (she strokes his back and says: "You have such sensual shoulders..."), but the authors didn't make her too sugary, unlike many other anime heroines, and even gave her a serious subtext. The touching scene alone where she, an android, is angry at D'anclaude and cries these words in anger ("If you humans don't want us, why did you create us anyway?!") perfectly sums up all her grief, sadness, despair and transports her uneasy feeling of existentialism to the viewers. Another great little moment has some giant street thugs surround Armitage in a dark alley, but she just suddenly starts to smile, surprisingly, and simply frantically beats them up since she has "robotic strength", in a pleasant twist to the cliche where women are always victims. The whole story plays out on Mars and used that chance to create a good description of it, from the church on that planet up to the new take on the old story where a police officer is transferred to another police precinct, which gives it some further independence, whereas the crystal clear cinematography and detailed animation are exquisite. Armitage is a lady and a tough person at the same time, one of the most fascinating anime characters of the 90s, whereas despite violence and the dark tone there is a slow, but steady all-encompassing emotional attachment growing from the "cold" androids that evolve feelings. A jewel of anime—and inherently the best film of the 20th century set on Mars.