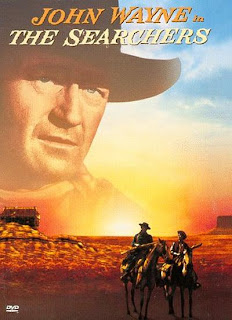 Texas, 1868. The lonely, aimless former Civil War soldier Ethan Edwards visits the isolated farm of his brother who lives there with his wife. There Ethan gets along fine with his nieces Lucy and Debbie, but then he goes with a group of cowboys to investigate the disappearance of the cattle. When they return back, hey find the farm and the house destroyed from the Indians: his brother and his wife were killed, while Lucy and Debbie were abducted. With Martin, the adopted son of his brother, Ethan starts a big search. When they find Lucy dead they go on to try to find Debbie, who is apparently held by the Indian "Scar". After many years, Ethan realizes the search became his meaning of life. When they find Debbie, Ethan plans to kill her because she married an Indian, but then changes his mind and still saves her and returns her home.

In that extraordinary popular film, director John Ford is exceptionally balanced while crossing from one theme to another, portraying thus at the same time a story about revenge, the inflicting scars of hate and violence on both sides, the racism of the anti-hero Ethan who hates Indians, the state of the US after the Civil War and the loss of idealism, always filling the story with clever details (for instance, Laurie says to Martin that they are already a couple for a long time. He, surprised because he didn't have a clue she even liked him, asks her since when, and she says: "Since we were eight!"). The film starts as an epic, but then slowly changes into an intimate, psychological, touching, understated story where the character Ethan realizes his empty life bizarrely found a new cause since the long search for his niece Debbie became his meaning of life—the only noble result from his stubbornness and brute life—whereas even Ford is changing his usual perspective in showing both Indians and White people as good and bad. The film is so influential because at its core it is about a despicable man turning into a hero at least once in his life by wanting to save a damsel in distress, in accordance with Ford's often themes of honor and integrity, causing some critics to even proclaim it one of the best westerns of all time. Especially intriguing is the finale where Ethan finds Debbie, but decides to kill her since she became an Indian, the very race he can't stand—yet when in the end he spares her and accepts her as her "own", the film is displaying the message that even he realized Indians are human. "The Searchers" have flaws, but if there is one scene that is a masterwork, then it is the final wide shot where Ethan is framed by the door of the dark house, which is a symbol of his isolation and castoff in this world.