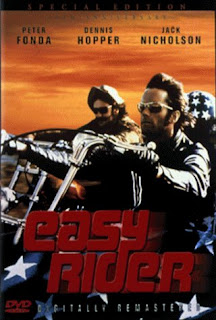 Wyatt and Billy buy drugs from some Mexican only to immediately sell it to some rich guy for a huge amount of money. They are two motorcycle riders who are traveling through USA and are often forced to sleep over in nature since managers won't let them enter into their hotel for their looks. In the morning they meet a nice man who makes them breakfast, later on a bunch of farmers who are planting crops in the desert. They are arrested by police because they joined a parade. In the prison they meet a drunk lawyer, George, who joins them an their journey, but gets killed in the night. Wyatt and Billy hire two prostitutes and later get killed on the road by two truck drivers.

Movies from the '60s have a great reputation, but in reality a large number of them seems outdated and over hyped by today's standards. Legendary road movie "Easy Rider", that starts in great manner with the dynamic song "Born to be Wild", also doesn't hold up very well and it's not excellent due to mild execution and too obvious messages, but it still has charm because it offers journey of two heroes through USA that represents some sort of a symbol of their spiritual search for happiness. In the finale they end tragically just because they looked like hippies, which is undoubtedly a sign how the society doesn't have understanding for individuals. The episodic script (nominated for an Oscar) is rather unfocused, clumsy and chopped up since many characters that the two protagonists meet end up rather underused and useless (farmers, a passengers who just says: "I come from a place. Because all places are the same."), except for the wacky lawyer George, played by Jack Nicholson, who is truly excellent in his role, making grimaces after drinking alcohol, claiming how he believes in UFOs from Venus where there is a perfect society since they don't have a government and saying to Hopper's character: "People are not afraid of you, but of that for what you stand for!" Indeed, the film speaks through his restless, wild, unconventional mood about the search for freedom and free spirit, that is always squashed by the cruel world.

Hey, I recently added a news widget from www.widgetmate.com to my blog. It shows the latest news, and just took a copy and paste to implement. Might interest you too.