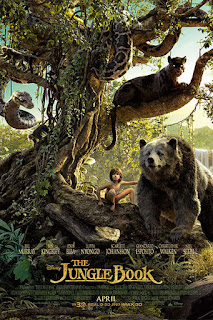 Mowgli is a little kid who was raised by wolf Akela in the jungles of the Indian subcontinent. His mentor is Bagheera, a black panther. However, when tiger Shere Khan discovers that wolves are raising a human, he wows to kill Mowgli. In order to save him, Bagheera leads Mowgli on a long journey, hoping to bring him back to a human village where he is safe. They get separated, and Mowgli finds and befriends a lovable bear, Baloo, who trains him how to get honey. When Shere Khan finds Mowgli, he chases him onto to a tree, but the branch breaks, killing the tiger. Mowgli is thus reunited with Baloo and Bagheera.

The 7th feature length film adaptation of Rudyard Kipling's eponymous and popular "Jungle Book", Jon Favreau's film is first and foremost a visual effects marvel, since the only real character is the leading child actor Neel Sethi (the only other real character, his film father, appears only briefly somewhere in the middle of the film) while the entire world around him is a CGI fabrication, but with such an eye for detail and such an extent that the viewers will have trouble distinguishing what is real and what not, the level of it not seen since "Avatar". Luckily, Favreau avoids turning it into a CGI fest, since very few moments seem over-the-top (except maybe for the exaggerated collapse of the temple), which gives it weight and a dose of realism, whereas the director still has some connection from his early days as an independent filmmaker, since he cares to instill the story with pathos and real life emotions. It is undoubtedly inferior to Disney's classic '67 film which had a stronger emotional punch and took more time for character development, yet this edition also has its moments. A few clever uses of cinematic techniques are welcomed (the time lapse of changing seasons through the valley is enriched with the camera moving through the river basin), Bill Murray gave more humor to the story voicing the lazy bear Baloo (when a comical anteater pesters him that using Mowgli to get honey is pointless, Baloo replies with: "You have never been more of an endangered species than now"; the "winter hibernation" in the jungle joke) whereas Ben Kingsley and Christopher Walken both gave another sovereign and charismatic performance by voicing the black panther Bagheera and the monkey king, respectively. A few more sharper or inspired moments seem to lack, yet "The Jungle Book" still has so much charm and (animal) sympathy that it manages to lift the film above the usual CGI routine that was served during that time.