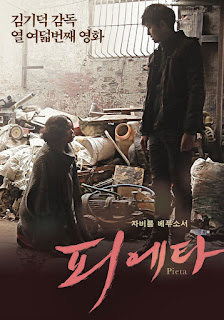 Seoul during Christmas. Kang-do is a cold, emotionless debt collector who threatens and beats people who took a loan and now cannot pay back the high credit interest rates. He sometimes breaks a debtor's arm or leg, so that his insurance company can give him the money to pay it back. One day, a woman in her 50s starts following Kang-do, insisting that she is his mother who abandoned him when he was a baby. Kang-do initially shrugs her off, but slowly accepts the woman in his apartment, and starts feeling genuine emotions when she celebrates his birthday and goes to town to buy him balloons to compensate for the events they missed out. When the woman disappears, Kang-do fears it must be one of the debtors taking revenge, and starts searching her. The woman is not his real mother – she is the mother of one of the debtors who died because of Kang-do. She commits suicide by jumping off the building in front of Kang-do, thereby devastating him for thinking he lost his mother again.

Kim Ki-duk's 18th film, "Pieta" is another one of his movies that explore the dark world through Buddhist themes, advancing into a small 'dark jewel' that is, despite all the harsh scenes, one of the most touching movies of the 2010s. Filmed in a 'worn out' camera look, with sudden jolts of camera movements, Ki-duk captures the unglamourous side of Seoul, the slums where the poor people have to pay their credit to the debt collector, Kang-do, who is emotionless and cold, going so far to break a leg of a debtor so that his life insurance can pay him, and even doubts the woman's claim that she is his long lost mother when he tries to rape her ("I supposedly came out of here? Then, can I go back in?") – but when she starts to cry, he suddenly gives up, which proves to be a crucial scene of his inner change.

Set during winter, with a scene where the mother persuades Kang-do to plant a Christmas-tree, "Pieta" almost seems like a realistic Korean version of "A Christmas Carol", only with a mother instead of ghosts, who seemingly wants to correct the protagonist's misdeeds by putting the blame on herself – in one scene, when a disabled debtor holds the mother as a hostage with a knife, threatening Kang-do, she says to him: "Spare him, it's not his fault! It is mine! He grew up without ever knowing love" – thereby transforming him into a full person with an emotional dimension. By showing scenes of debtors who live in slums, Ki-duk gave a portrait of the effects of ruthless Darwinian Capitalism on society, taping on some bigger themes about existence on Earth, with some arguing that it circled out the outline of the inherent flaw of life's design in which the lesser beings are inevitably eaten by the bigger ones, while others see it as a poetic commentary of a cold, materialistic world out of which "forbidden" spirituality and emotions appear, as some sort of protest against the fatalistic order, and thus manage to overthrow it from inside. By blending Christianity's themes of redemption with Buddhist message about the spirit trapped and addicted inside the material world (money) that causes suffering, Ki-duk delivered another unique achievement, raw and harsh, yet also tender and magical at the same time – as bizarre as this syncretism sounds, it works outstandingly in this edition.