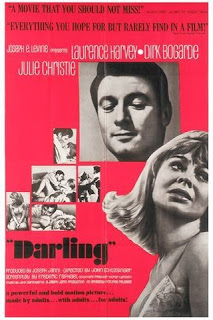 London. Diana is a model who leaves her husband, Tony, for a new man, TV interviewer Robert, who also leaves his wife and kid for her. Diana and Robert move to a new apartment, but she starts to quickly gets bored with him, as well. She has an affair with media advertiser Miles, who assures her a small role in a movie, "Jacqueline". She becomes pregnant and has an abortion. When Robert finally finds out she has been seeing someone else, he leaves her. In Rome, Diana is cast in a chocolate commercial and a wealthy Prince, Cesare, who has seven children, subtly proposes her, but she does not answer. Diana returns to London, leaves Miles and marries Cesare in Rome. However, she gets bored of that life as well, and returns to London to have sex with Robert. The next day, Robert forces her to leave him and return to Rome to Cesare, her husband.

One of the most distinguished movies that documented the taste and feel of the 'swinging sixties' era in London seems as if it is itself marred somewhere between a classic film at the beginning and a modern film in the second half: the dialogues are stale or melodramatic whereas the story does indeed seem like a soap opera at times, yet it tackles some highly taboo topics at that times, relevant even today (the heroine, Diana, for instance, says this after having an abortion: "I will never have sex again...") and features a wide array of cinematic techniques, which show that director John Schlesinger knows his movie language (jump cuts, freeze frames, double exposure...). However, "Darling" has a pointless and rather aimless story, lost in episodic vagueness, never managing to conjure up a true character study with a point revolving around promiscuous Diana who jumps from a man to man, and even flirts with Catholicism and moving to live in Rome, yet never feels happy or content with her life: it is all just one giant escape from one phase to another, without any safe ending. It combines traces of existential crisis a la Antonioni with sexual adventures, yet does not have a clear (emotional) conclusion. Some of the dialogues do manage to ignite, however (when Robert complains that he is basically a "professional question mark", Diana counters with: "Still better than being a professional bosom!"; during a charity speech, the speaker is described with: "He is a man of a few words... Yet they are long") and Julie Christie is very good as the confused heroine, with the famous brief scene where she takes her clothes off in front of the mirror before she collapses from crying, giving her a title of the first actress to get an award for her performance in a mainstream film to appear naked.  "Darling" offers some good thoughts, yet lacks a clear narrative and is overlong to truly achieve a permanent value.