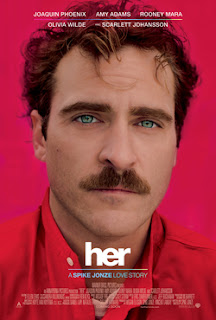 Sometime in the future, Theodore works as a professional writer of romantic letters in a company. He is alone and suffers from his recent divorce with Catherine. One day, he installs a brand new computer operating system with a completely autonomous artificial intelligence, gives it a female voice and it calls itself Samantha. Theodore at first uses Samantha to help him clean up his computer files, yet gets amazed at Samantha's voice and a sense of humor and philosophy, and thus falls in love with her. Since he can always talk with her via his iPhone, and even "bring" her to a double date, some people think he is autistic, others, like co-worker Amy, approve.When Samantha evolves in a far higher level, she leaves Theodore for a companion with other OS programmes. Theodore thus stays alone with Amy.

Hal 9000 meets "Love Story" – something like that could be used to describe the unusual and extraordinary Sci-fi film "Her" that used a clever, funny, thought provocative and bitter concept as a thought experiment that explores the ever increasing relationship between humans and technology on one side, as well as the decreasing relationship and loneliness between humans on the other. Luckily, unlike his previous films, director and screenwriter Spike Jonze reduced his pretentious excess and delivered a rather measured, wise and restrained directing style that fits with the futuristic topic, whereas all the actors are in top notch shape, especially Joaquin Phoenix who almost has to carry the entire film all by himself, though Scarlett Johansson also gives a seal of presence thanks to her expressionistic voice. "Her" has so many wonderful, philosophical and spiritual lines that it is a delight: one of the best is the sequence where Theodore returns after a failed date and has a long talk with Samantha, who asks a fantastic question ("How does it feel to be alive right now?") and he just takes it from there ("Sometimes I think I have felt everything I'm ever gonna feel. And from here on out, I'm not gonna feel anything new. Just lesser versions of what I've already felt."), culminating in a highly unusual, yet also highly aesthetic "sex scene" in the dark featuring only his and her voice, which contains that uncapturable beauty. The script is highly contemplative, and it is never clear if the OS Samantha is a real personality with real emotions or just a well done fake, a computer programme used to perfectly mimic Theodore's emotional needs. It explores themes of soulmates and inner beauty, posing the question if such a human-machine relationship could work at all, despite the differences. A small complaint should be aimed at the too long running time of two hours, the 'cop-out' ending, as well as a few schematic subplots that hinder the movie to outgrow its limits of a thought experiment at times, yet overall it is surprisingly well done, with enough sophistication to make it work.