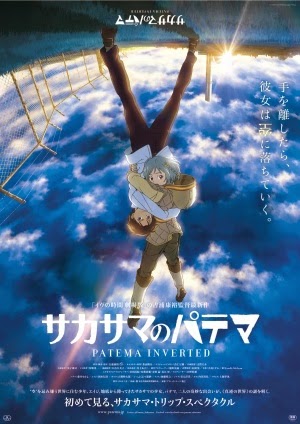 Decades after an experiment of creating energy from gravity went awfully wrong, Patema, a young girl, lives inside a sealed off city, underground. A photo of a sky - something she never seen before - causes her to explore a world outside, but when she falls down a hatch, she finds out she is actually falling up, since she lands on Earth's surface and is saved from a boy, Eiji, from falling and disappearing in the sky. The two of them fell in love, but she is kidnapped by an extremist leader of a cult that hates all the "inverted people" because he thinks they are to blame for the disaster that has befallen them. Eiji and other "inverted" people save Patema, and cause a crack of the surface - it is then revealed that Patema and her people where actually on the right side of the gravity, while Eiji and the others are "inverted" and that their surface was a fake one.

For all the praise that has to be given to "Patema Inverted", it is not as great of an anime as it should have been - if such a fantastic concept had been used by Miyazaki or Takahata in the 80s and 90s, it would have been a masterwork with ease. This edition is very good, but not completely brilliant, though. The magic of the simple, yet genius original idea - what if there were people who have an effect of inverted gravity, "antigravity", in the same world as we with the effect of normal gravity - gives "Patema" spark and carries the storyline with ease. This gave rise to two sequences that are so irresistibly cute and refreshing that they simply cause a smile on viewers' faces: the first one is when Patema and Eiji meet for the first time. She is holding on to a fence as to not fall up, and he helps her by grabbing her and walking her to a small cabin where she can safely "fall" on the ceiling, and the sight of them two - he walking downwards, and she sticking up her two feet above him - is smashing. The second is the long moment where Patema, attached to a heavy "anigravity" weight on her leg, is falling up, endlessly in the sky, while holding Eiji, and this seems like an parachute dive in reverse. However, the storyline is somehow too simplistic - Patema and Eiji fall in love, but it is not quite clear why; the bad guy, a fanatic, is one-dimensional - and seems somehow as if it lacks a more versatile development of the plot. "Patema" is just like Yasuhiro Yoshira's previous film, "Time of Eve": refreshingly new and unique, but there is still something missing - some truly courageous example of narrative and emotions, a broader spectrum of viewing experience - to be considered an all-time anime classic, since rarely some of them play it this safe.