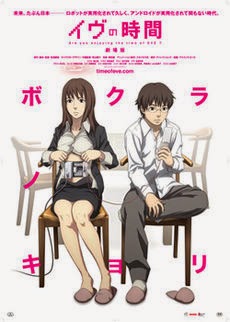 In the future, androids are so perfectly anthropomorphic that they are obliged to turn on a fluorescent light ring over their head, to distinguish them from humans. Student Rikuo treats his female house-droid Sammy as an object, until he discovers she secretly visits an underground cafe, "Time of Eve", where androids can turn off their rings and act like humans. The owner of the cafe is Nagi. Rikuo and his friend Masakazu meet a lot of nice people, many of whom turn out to be androids, which in turn causes a change in their character, and from there on they start treating androids like equals.

This is a kind of anime that takes all the themes already explored in "Blade Runner" and yet manages to restructure them anew in order to give the viewers a fresh take on the possible blurring of the line between humans and artificial humans, in this case androids. Unlike Scott's classic film noir, this story takes a pleasant 'slice-of-life' approach, since it plays out almost entirely inside the "underground" cafe and the simple conversations between humans and androids while drinking beverages, whereas it even has a hilarious little reference on "Blade Runner" in episode 2, as well. "Time of Eve" is very short, spanning only six episodes, but achieves a fine balancing act: it is simple, fun and accessible, yet clever and thought provoking at the same time. The storyline is scarce, yet it achieves what is sets up to do.

The catch is that androids can only be distinguished when they turn on their "light ring" above their head, and already the pilot episode establishes a very inspirational moment: students Rikuo and Masakazu enter the "Time of Eve" cafe, where such a rule is forbidden, and meet a very talkative, lively girl, Akiko. She talks fast and asks them all sorts of questions. The two guys like her, and the next day, while in the classroom, they meet Akiko again. The camera shows Akiko from the head down, while Rikuo and Masakazu stare at her in puzzling silence - until the camera tilts up, revealing Akiko has a ring above her head!  It uses humor to broaden the relationship between Rikuo and androids (there is a funny running gag in one episode where he constantly stars at the bust of a woman in the cafe) and has a great visual style (despite animation, the camera is fluent and moves in dynamic fashion, and even turns 360 degrees in the scene where the two heroes talk with a robot at the table). The symbolic plot also has a wide spectrum of interpretations regarding discrimination (you can, for instance, regard it as an allegory of antisemitism in Europe in the 30s, where the rings the androids have to carry resemble the armbands the Jews had to wear). The major flaw, though, is that the relationship between Rikuo and his android Sammy is left so underdeveloped, which, together with a very vague ending, left a feeling as if the story was left unfinished.