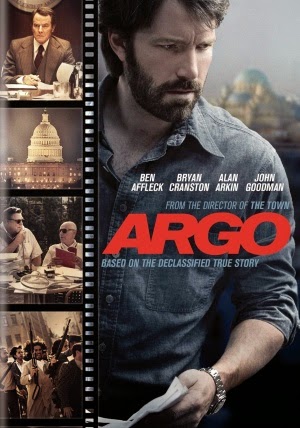 In '79, the Iranian fundamentalist revolution breaks out, which results in the overthrow of the unpopular pro-American government led by Shah Pahlavi. The anger spreads to demonstrators who storm the US embassy in Tehran. Numerous are taken hostage, but six embassy staff members manage to escape and hide in the Canadian embassy. In order to save those six Americans, the CIA approves a crazy plan by Tony Mendez: to use Hollywood figures John Chambers and Lester Siegel in order to feign a Canadian production of a fake sci-fi film, "Argo". Tony then enters Tehran, pretending to be a location scout for "Argo", and disguises the six embassy members as his film crew. The seven of them manage to board a plane and leave safely back home.

The incredible rescue operation of six Americans from Tehran as part of the so called "Canadian Caper" operation, is such an amazing story that it is a wonder Hollywood took so long to finally make a movie about it. Following three different award ceremonies where "Argo" won the best film award, it retroactively triggered an angry backlash, which was exaggerated: it is evidently not the best film of 2012, yet it has so many virtues it would be wrong to minimize them. For one, after so many bombastic 21st century films with over-edited, bloated tricks, "Argo" was seen as a refreshing surprise since it took a 'good-old-school' filmmaking approach and simply told a simple, good story in a normal way, even adding a nice homage to 70s and 80s thrillers evident already in the opening Warner Bros. logo which was used in the 70s. The sequences of the Iranian Revolution are directed with life, the supporting Hollywood characters played by John Goodman and Alan Arkin who try to feign a fake movie are deliciously self ironic for a Hollywood film ("If I'm doing a fake movie, it might as well be a fake hit!"; "I took this meeting out of respect, because I wanted to say 'no' to your face...") whereas numerous little details are meticulously crafted (for instance, the US embassy shredded all documents before the storming of the location, but the Iranian guard takes its time to browse through tens of thousands of shredded vertical papers-stripes in order to construct the faces of the members, almost as a puzzle). There are several omissions - the Iranians are sometimes portrayed in black-and-white; the numerous factual accuracies are evident, especially in the too many fictional "saved-in-the-nick-of-time" moments in the finale that have a tendency of overdramatize the situation - yet the flaws never outweigh the virtues. Ben Afflack also matured remarkably as an actor, and displayed a very stoic performance, yet it is even more interesting to notice how he matured as a director as well, since "Argo" is so elegantly crafted it flows by in a time that seems like only a moment.