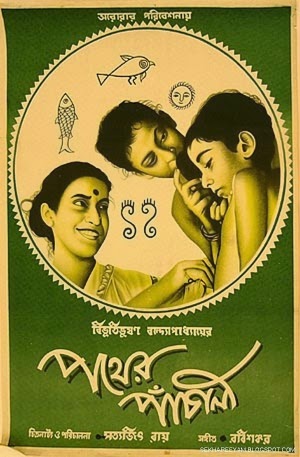 A family lives in poor conditions in a commune somewhere in Bengali jungle: the mother, Sarbajaya, feels the weight of poverty every day watching her two kids - daughter Durga and son Apu - grow up in such conditions, sharing a roof with a crippled old aunt, Indir, since her husband, Harihar, cannot get a breakthrough as a writer and thus has to accept occasional jobs in far away villages. Durga is accused of stealing a necklace from a neighbor, but she denies it. The kids grow up playing in the jungle and observing a train pass by. Indir dies. During heavy rain, Durga gets pneumonia and dies due to inadequate care. Upon returning, the father is saddened and decides to leave the community. Before leaving, Apu finds the stolen necklace in Durga's plate, and throws it away in the swamp to hide it.

Satyajit Ray's feature length debut film, "Pather Panchali" is often hailed as one of the greatest debut films of the 50s, and it is definitely a quality made, unassuming little film - where the author had to speak up about the poverty of his country and show the conditions people in Bengal lived in - yet it still feels slightly overrated, overstretched and too thin to truly ignite that deeper appreciation of a movie goer. Ray follows the 'slice-of-life', almost documentary depiction of events reminiscent of Italian neorealism, but - except for the touching last scene where Apu throws the necklace into the swamp - very few sequences are truly decisive in establishing some greater payoff of inspiration that "clicks" with the viewers. The scenes of the kids observing a train in the meadow or the old aunt dying come swiftly, and slightly leave the same way they entered the film: on one hand, the protagonists give a natural feeling without acting, but on the other, it seems Ray and his film crew did still not get a hang of it as they later would. The storyline is sad and emotional, and often quite unsettling to watch due to its theme, and trying to glamourize these conditions would have been wrong. Ray would later make a whole trilogy using "Panchali" as his starting base, which were followed by "Aparajito" and "The World of Apu".