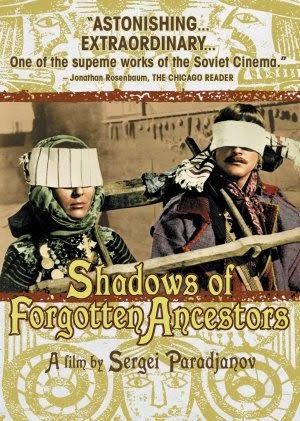 Western Ukraine, 19th century. Ivan is a boy living in a small village under the Carpathian mountains. While in church, he asks his father if the devil is depicted on a painting inside, but his dad replies that the devil can not be found in the church, but only among people. In a feud, his father is killed, but Ivan falls in love with Marichka, the daughter of the man who killed his father. As a lad, Ivan leaves his home and mother to work and earn money from a shepard. However, when he returns, he finds out Marichka drowned while trying to save a lamb. He spends years living alone in his home, until he finally marries Palagna. However, they cannot have kids, and Palagna starts cheating on him. He dies by hallucinating that he is with Marichka again.

One of the best films from the 60s, and among the best films of the 20th century, "Shadows of Forgotten Ancestors" immediately caught Sergei Parajanov on the right foot, who hereby crafted his feature length debut film and gave a homage to Ukrainian culture at the same time. Parajanov simply has a fantastic visual style, practically inventing his own camera technique: the camera always moves, is fluid and, it seems, relies only on the author's intuition when crafting scenes, but the superior awe is there nonetheless, and feels genuine. Parajanov's camera goes to staggering efforts and lengths in making ordinary scenes look extraordinary: in the opening in the forest, the lens takes the POV of a tree falling directly above Ivan before he is pushed away and rescued by a man; there is a 'tour-de-force' crane shot of a Ivan and Marichka as kids descending down a hill, who go from above the camera to under it, to take a plunge in a creek, all the while the camera moves above them as if it was floating; the underwater shot of Ivan drinking at the top of the river's surface; the scene where Palagna walks by the fence at night, while she is illuminated by a patch of light...

The effect is smashing, a joy to watch, and gives the simple Romeo and Juliet in a village story power. As is often the case, Parajnov even here relies more on mood than on a clear narrative, and reduces the amount of dialogues to a minimum, letting the cavalcade of opulent images speak for themselves, but also allowing details of the Ukrainian folklore (the amusing wedding ceremony, where Ivan and Palagna are "joined" by a "wedding latter"). The Soviet censors reacted negatively to Parajanov's untrammelled style, but even though they had more power, it could not be helped: Kiev was right, and Moscow was wrong. Parajanov simply did not care for someone dictating how he should make art, and the result is far superior than the amassed amount of dated 'Soviet realism' films. The last 30 minutes almost enter stream-of-consciousness territory and the surreal, yet the magic of detaching from the reality and creating a new world from the 'grey drama' genre - that this could have conventionaly been - is so supreme that one simply has to admit that this is a shining film.