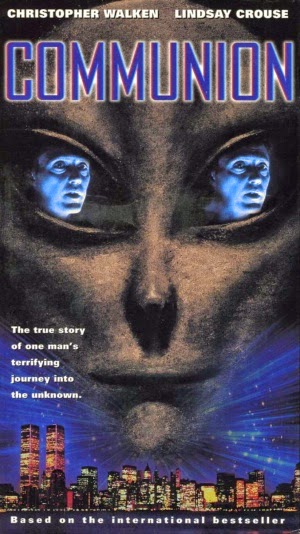 Writer Whitley Strieber goes on a vacation to a cabin in the woods to write his next novel in peace, together with his wife and son, as well as two friends. However, that night, a strange light is seen outside the cabin, and Whitley has only a vague memory of what happened next. Several months later, Whitley was again in the cabin on Christmas, when lights were seen again outside that night. To ease his unexplained paranoia, Whitley undertakes a hypnosis and finds out he was kidnapped those two nights by bizarre goblins who brought him to a room with alien looking creatures. After coming to terms with the event, Whitley decides to write his next novel about them.

"Communion" is one of the most bizarre alien films because, for one, it is never outright clear if the beings shown were truly aliens since they were accompanied by strange, dwarf goblins, and for the other, the main human protagonist, Christopher Walken, is actually more bizarre then those beings, which might have been one of the reasons why author Whitley Strieber disapproved the film. Walken plays the hero with a dose of 'tongue-in-cheek' irony that is so out of this world that it has to be seen: in one sequence, where he is in a room without clothes in front of the aliens, he says: "Look at me, I'm naked! I'm talking to you like you are real.", and there is even a silly scene where he suddenly starts dancing with the goblins, almost as if he does not care. The creature sequences are directed like a lynchesque surreal dream, making people speculate that it was implied that the creatures were just hallucinations caused by drugs. At any rate, all of this in very inconclusive and chaotic, without a real point, whereas some scenes look fake (Whitley talking under hypnosis, but keeping his eyes open). However, one has to hand it to the authors for crafting two moments that really give the viewers chills: one is the creepy scene of the cabin in the woods at night, where Whitley does not notice an alien "peeking" behind the wall, and the other is when he is in his bed and hears a noise behind the door - what happens next truly is almost as scary as a horror.