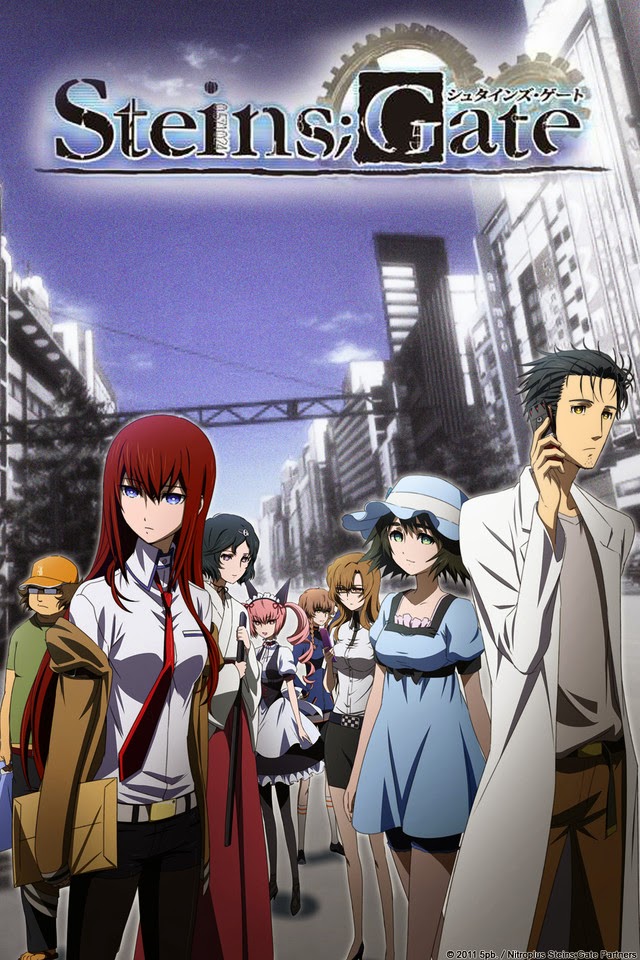 Rintaro Okabe, who calls himself Houin and a "mad scientist", is a university student who founded a small improvised laboratory in an apartment, consisting only out of his friends, the overweight Daru and the girl Mayuri. As he attends a conference about the possibility of a time machine, he meets the red-haired girl Kurisu - who is later found dead by stabbing. As Okabe sends an SMS about this incident, he suddenly finds himself alone on the street and Kurisu alive, thus realizes his text message was sent back in time by accident since it was sent to an mobile phone attached to an experimental time travel microwave. He contacts the mysterious John Titor on the internet, who claims that he is from 2036, when CERN established a world dictatorship thanks to the invention of a time machine, and is thus trying to stop this in 2010. When Okabe discovers that Titor is actually a girl, Suzuha, they team together to find an old IBN 5100 machine and undo all the SMS Okabe sends back in time in order to return back to the original timeline and then foil the invention of the time machine, by saving Kurisu from stabbing and burning the time machine documents which her father intended to sell to Moscow.

Even though it was ranked no. 1 on Anime News Network's top 100 anime list, "Steins Gate" is an interesting and sometimes intriguing, but overall slightly overhyped and overrated anime series. It has an excellent concept - that daringly involves John Titor and today's CERN research facility that established a world dictatorship by 2036 thanks to its supremacy caused by the invention of a time machine, whereas the main character, Okarin, has to stop this from happening in 2010 - however, a lot of this storyline and procedures were already seen in previous films about time travel, such as "The Terminator", "Back to the Future", "12:01" and "Groundhog Day", so that "Steins'" story is not that fresh anymore. Unfortunately, the majority of the 24 episodes do not revolve around Okarin fighting the CERN agents, but instead around his endless time leaps 48 hours ago in order to undo all his SMS he sent back to the past, to restore an "uncontaminated", original timeline, which is not as exciting as the Titor subplot and becomes tiresome after a while. Also, the 'filler' episodes and fan service do not help, whereas the characters are somehow distant and autistic: even though they tried to explain why Okarin pretends to talk to his "hang up" mobile phone and shout how he is a "mad scientist" all the time, it just seems weird, nonetheless.

"Steins" has moments of greatness and inspiration: the plot twists in episodes 14 - where the true identity of Titor is revealed - as well as 20 and 23 have a point; the first episode, where Okarin is walking on a street full of people, sends an SMS and all of a sudden he finds himself on the street alone, is a neat example of subtly "leaping through time", whereas there is one later episode which is very poignant since it shows that Okabe can either have a timeline where the world is saved or a one where Feyris dad is alive, but not both. The rest fairs to a lesser degree: for instance, in a subplot, CERN agents kill Mayuri, but Okabe leaps back in time in order to save her. However, Mayuri then dies in a car crash. Okabi leaps again - and this time, Mayuri dies by tripping and falling under the subway train. This all is so ridiculous it is suitable more to Hyatt in "Excel Saga". Not enough was done to explain why Mayuri's death is so inevitable, nor how that can be nullified by restoring the original timeline. The joke where Kurisu touches the androgynous Ruka's crotch to see if he is really a girl or not, is a very cheap atempt at a joke as well. The resolution in the final episodes does not have sense, which means that - despite a carefully constructed structure where events have a double meaning later on - a degree of contrived time travel plot holes was not avoided.