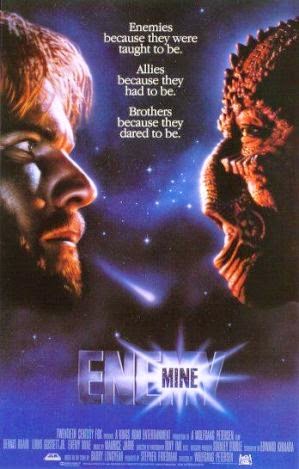 In 2092, humans are fighting reptile aliens, the Dracs, over claim for far away planets. One human pilot, Will, tries to shoot down a Drac spaceship, but they both crash and get stranded on a strange planet. Will is at first hostile towards the surviving Drac, Jeriba, but they learn to understand and respect each other since their cooperation assures their survival there. Over the years, Drac dies, but since he was a hermaphrodite, he gave birth to a baby Drac, Zammis, and Will raises him. When a human spaceship lands, they take Zammis as a slave. However, Will is also found by his unit and returns to save Zammis and other Dracs from slavery.

"Enemy Mine" is a SF version of "Hell in Pacific" - just much more tedious and pathetic. Director Wolfgang Petersen and screenwriter Edward Khmara talk about noble messages, such as tolerance and antiracism, but they send them in such a blatantly obvious manner that the viewers may cringe from the process. The opening act actually works thanks to Petersen's directing skills, and has a few good examples of humor (Will trying to speak the Drac's language with a horrid accent) and drama (upon hearing the Drac's holly book, the Talman, which says that Dracs should respond to their enemies with love, Will says that he already heard that in the "human version of the Talman". Jeriba responds to him: "Of course you did. Truth is truth."), and it was a noble attempt to do an unorthodox SF film, a one that was not action oriented but just restricted to two stranded protagonists, but the 'kammerspiel' intention does not work because it quickly gets obvious that "Enemy Mine" is more suitable for a short than a feature length film: after 40 minutes, the story cannot go anywhere from there and it becomes a 'standed whale'. Realizing that concept cannot carry the whole film, Petersen thus switched to a 'single parent-abandoned baby' concept in the 2nd act - and then even to a slavery concept in the 3rd act. Needles to say that all these contradicting acts are incompatible and thus nullify each other, whereas the sappy-melodramatic scenes become unbearably preachy. Unfortunately, with time, getting stranded on a strange planet became equally of a pain for the two protagonists as much as it did for the viewers.