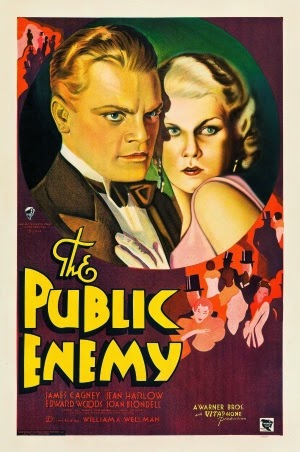 Tom Powers was mischivious ever since childhood, despite his father who would beat him to try to instill some decency into him. As grown ups, Tom and his friends Matt and Larry already established themselves as small time thieves, when gangster Putty Nose hires them to rob a warehouse. However, the robbery goes awfully wrong and Larry is killed by the police, while Putty Nose left them without any back up. Years later, Tom and Matt join forces with gangster Paddy to start a bootleg racket, forcing all the pubs in the town to buy their beer exclusively, thereby causing a conflict with a rival gang that wants to sell their own beer. Tom gains a fortune and a girlfriend with it, Gwen, yet all the time calms him mother by pretending to have a respectable job. When Matt is killed in an ambush, Tom kills the leaders of the rival gang, but lands in hospital. The gangsters kidnap them from there and leave his corpse in front of his mother's house.

A masterpiece of 'good old school' Hollywood, "The Public Enemy" is one of those classic films where every little scene has a purpose and the authors know exactly what they want to do and how they want to tell the story, which made this, and "Little Caesar", the prototype of the modern gangster film. Just like most early films, "Enemy" does not use violence or shock but intelligence for a narrative in order to tell a point, yet even though all the blood is off screen, the characters' gestures are so strong the tension is felt in almost every frame. James Cagney is briliant as Tom Powers, a person who does not distinguish what is right or wrong, but only what gives him personal gain, a very unlikable character who is simply a born criminal and does not know to live a civilized, quiet life, and to whom circumventing the law is an addiction.

Set during the Prohibition era, the film has strong, highly electrifying sequences: in one, Tom brings a keg of beer to his mother's home for dinner, but his brother, Mike, refuses to drink it, knowing how it is used in business. When Tom insisits he drinks a glass, Mike "explodes", gives a speech about "blood and beer" in the keg and then throws it on a table, smashing it. In another, Tom and Matt visit their chilhood traitor, gangster Putty Nose, in his apartment. The sequence where he is begging them to spare his life, and even starts playing a song on the piano from their childhood, while Tom sneaks behind him and shoots him, is truly a bitter and powerful moment, even though the murder plays entirerly off screen. The combination of realism (vigorous behavior; depiction of poverty) and stylistic additions (elevated dialogues; a moral ending) give a fine balance of a not very popular topic - even better than "Goodfellas", "Enemy" influenced a lot of gangster films, from "The Godfather" up to "Miller's Crossing".