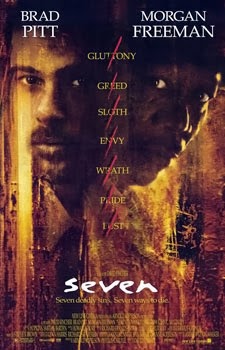 A week before his retirement, Detective Somerset gets a new partner, the young Mills, who wanted to move to his dirty, dark city. They are informed about an obese man killed in his apartment, where they discover the word "Gluttony" written on the floor. When a corrupt lawyer and a child molester are also found killed and the words "Greed" and "Sloth" are written in their rooms, Somerset concludes that the serial killer is killing following the pattern of seven deadly sins. After more murders, the killer, John, arrives to the police station and gives himself in. Insisting he is just doing a Divine punishment, he asks Somerset and Mills to accompany him to a remote meadow. There, a delivery van delivers John's package, the head of Mills' wife. In rage, Mills kills John, completing his punishment because he himself felt envy, the last sin.

After his disappointing directorial debut film "Alien 3", director David Fincher made a huge quantum leap in his career with the excellent crime film "Seven", establishing the right amount of dark mood and style that thematically suits the story. It is dark and pessimistic, yet very clever presentation of a simple story about two Detectives searching for a serial killer: not a single scene seems superfluous, the film is suspenseful from start to finish and has almost an 'inner directing' skill of transforming a story into an engaging experience where the viewers are glued to it naturally and do not even think about editing, acting, cinematography or anything else about the means of a film. Unlike many other serial killer films, where a story goes back and forth between the good guys and the bad guy, "Seven" is presented almost exclusively from the perspective of the two Detectives, and we never get a glimpse of the killer, his motivation or plans until the last 20 minutes of the film where he gives himself in voluntarily (!), but not without a dark twist. Also, it is interesting to note that not a single murder is depicted on screen - except one at the end. The film is also a subtle character study about the pessimistic Somerset and the world that made him like that, a world where the unfair rules: even religion is here used only as a motive for the killer to massacre victims who performed the seven deadly sins, and thus the hero's long monologue to Mills in the bar is a defining moment: "Apathy is the solution. I mean, it's easier to lose yourself in drugs than it is to cope with life. It's easier to steal what you want than it is to earn it. It's easier to beat a child than to love it." Such a negative, bleak view on life alienated a part of the audience, yet it cannot be denied that Fincher made a strong job with the film.