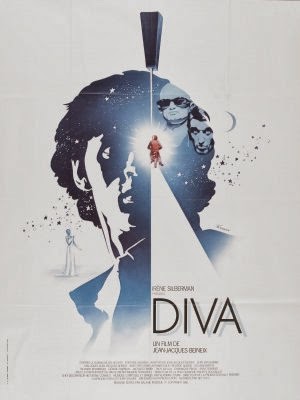 Jules, a young courier, is fascinated by the African-American opera singer Cynthia, and secretly (and illegally) records her singing during a concert. He soon finds himself in the middle of a conspiracy when a prostitute, Nadia, hides her tape in his moped before being murdered by criminals Cure and Antillais. When the thugs destroy his apartment, Jules hides in the home of a girl Alba, and her cool philosopher Gorodish. It soon turns out that the tape the thugs are looking for contains Nadia's recording where she explains that Chief Inspector Saporta is actually leading an illegal human trafficking ring of women from Africa who work as prostitutes. In the shootout, Cure, Antillais and Saporta are killed, while Jules survives and meets Cynthia.

Jean-Jacques Beineix's directorial debut film, humorous crime "Diva" is not such a sensation as some would make you believe it, yet it is a refreshing and relaxed film that broke away from the French trend of realism and offered pure escapism, to such an extent that it it almost an anti-thriller at times. Instead of a gritty mood that would have prevailed if the movie was made in the 70s, this a 'light' and accessible crime flick, filled with a great photography and comical moments (the great, and humorous chase sequence where Jules is escaping a police officer by entering a train with a moped (!) and then driving across the subway stairs for several minutes), whereas one supporting character simply stand out, Gorodish, probably one of the coolest philosophers ever caught on film (and who has a great little gimmick used later in the film to make two rival criminals eliminate each other). The ending is brilliant, and it involves a funny little moment where, just as the bad guy is about to shoot the good guys, someone turns off the lights in a garage. Still, while the crime story works, the fan-idol story - revolving around Jules and his beloved opera singer Cynthia - is almost obscure and irrelevant to the main plot, and it is a pity to see such a 'thrid wheel' detract from the rest of the rather well made film. Also, the movie takes quite some time until it finally 'gets going'. Still, today it enjoys a cult reputation and it was nominated for a BAFTA for best foreign language film