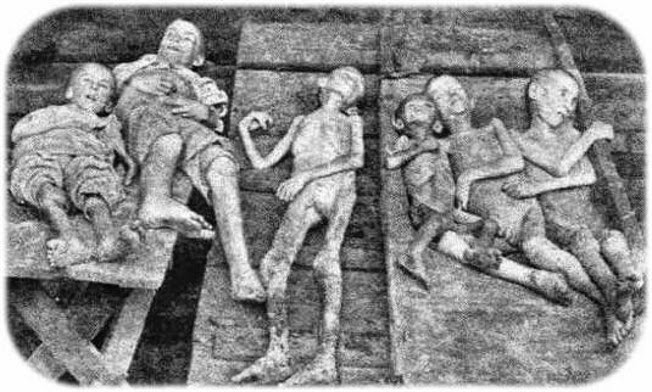 After World War I, Ukraine found itself in the infamous Soviet Union. While Lenin at first tolerated the Ukrainian patriotism, his successor Stalin was angered, among others because Russian was not taught in Ukrainian schools as a primary language. In order to suppress the Ukrainian nationalism and subjugate it in the USSR, Stalin ordered a decree sealing off the borders of that Republic and raising the quotas of crops Ukrainian farmers had to give to for the collectivization. Their harvest was sold to the foreign market in order to finance the Western know how for USSRs industrialization. However, that triggered Holodomor, one of the worst famines in human history, causing a mass death in Ukraine and weakening it.

The second worst genocide in World's history after the Holocaust, Holodomor was an example of the bottom of human degeneration that caused the death of at least 2.7 million people in the Ukraine - and cast a long shadow of the history record of the ethics of Moscow's politicians - yet it was a rare topic in cinema, with only a handful of films covering the event in the 20th century. One of them is "Harvest of Despair" by joint directors Nowytski and Luhovy who collected a dozen of valuable testimonies of survivals who recollected chilling stories of the 1932-33 famine. Despite a very emotional theme, this documentary avoids turning into an anti-Russian propaganda or a vehicle to ignite hate, instead just presenting the facts to the audience of the world to see and draw its own conclusions, just like any professional documentary should do.

The stories are enough to conjure up an era of the loss of humanity, nonetheless, with a couple of graphic details: for instance, cannibalism (a neighbor eating three children) or instances of feeding animals (employees had to feed horses only at night, to avoid starving people stealing horse food, since they needed these animals to collect corpses on the streets). The movie explores alternative explanations for the event, such that it was a natural disaster, but gives good points otherwise (the harvest for 1932 was enough to feed Ukraine for two years; the Soviet soldiers were guarding silos full of grain they took away from the farmers themselves) in order to make a better picture of the event. One significant complaint could be aimed at the movie's running time of only an hour, which gives an impression that the theme could have been elaborated more - as a footnote for comparison, Lanzmann's similar documentary "Shoah" lasts 10 hours. Overall though, "Harvest" is a good testament of the event and a timeless tragic story of the big taking advantage of the weak.