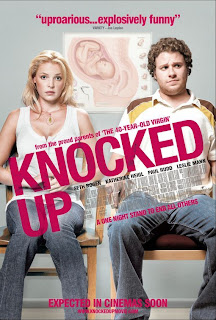 Los Angeles. In order to celebrate her promotion, reporter Alison gets drunk and has an untypical one-night stand with Ben, an unemployed, marijuana smoking slob. Unfortunately, Alison learns that she became pregnant. Even though she never wanted to see him again, Alison meets with Ben and they decide to try to become a couple. However, Alison notices that marriage is not that easy, even with her sister Debbie who is married to Pete. Alison breaks up with Ben after an argument, but they make up after she gives birth.

If you ever wondered how it would look like if Reitman would get drunk and then stupify, bastardize and nullify all the efforts of "Juno", a sophisticated comedy, then check out "Knocked Up", a vulgar version of the theme of a young couple that copes with an unwanted pregnancy. Judd Apatow again appeals towards the cheaper tastes too often, from jokes about humping up to various sexist jokes, throwing numerous attempts at gags of which only about 10 % manage to get a hold of the viewers. Strangely, thought, the movie is overall well meant, especially towards the dramatic ending, yet overlong, dreadfully banal and lax, in which the main couple, Ben and Alison, is bland and one-dimensional, overshadowed by the charming couple in the background, Alison and Pete, who practically steal the show - you can't quite put your finger on it, but Leslie Mann's and Paul Rudd's charisma managed to get unleashed much more easily in this edition. Simply too much of the film feels like a set of throw away jokes (especially the useless Las Vegas subplot), i.e. as if anyone could have thought of it without half of effort. Here and there a few good jokes do manage to show up, though: the club doorman sequence shows that Appatow can make a richer example of humor if he puts some effort into it; a few lines are quietly hilarious ("Are you now angry at your baby? You know, because it steals all the food you eat.") whereas a small gem is the little role played by ex-Egon Spengler, the legendary Harold Ramis as Ben's dad ("You are the best thing that ever happened to me." - "Me? Wow, now I feel sorry for you").