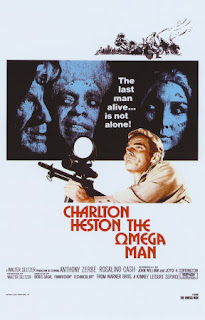 After a global war involving biological warfare, all the people are either dead or became albino mutants. Neville, who took a vaccine and survived, presumes to be the last man on Earth. Roaming through the empty L.A. streets, he fights the mutants and is in search for human survivors. One day, the finally finds a group of normal people on a hill and falls in love with one of them, Lisa. However, she becomes a mutant herself and falls under the influence of its leader, Matthias. In the end, Matthias kills Neville with a spear, but the surviving people manage to take a bottle of his blood, which contains the vaccine in it.

A true great fan of science-fiction, Charlton Heston often accepted roles even in inferior movies of that genre, just to enjoy in its environment, and among them was the second adaptation of Richard Matheson's post-apocalyptic novel "I Am Legend", here re-titled into "The Omega Man". The sole concept of Heston as the only surviving man on Earth, driving through the empty streets of L.A., is exciting and ignites a spark in the opening 20 minutes of the film, and one sequence stands out there particularly, the one where he starts a screening in an empty cinema in order to watch a Woodstock documentary, just to hear people talking, and comments ironically to himself: "They sure don't make pictures like that anymore." Unfortunately, the "The Omega Man" overstretched its story to such an extent that it did not manage to consolidate that momentum from the opening act, ultimately becoming dull, boring and monotone in the exhausting last third. Also, there is a big inconsistency here: even though the movie at first establishes that Neville is the last man on Earth, watches movies and talks to a puppet during dinner just to have someone to talk to, all of a sudden it turns out that albino mutants can talk in perfect, articulate English, and one has to wonder: why are they so inhuman? They look just and act like ordinary people, just in albino color, not like mindless zombies. Not enough was done to justify Neville's action to exterminate them all, which might be the reason why the story showed the first interracial kiss in Hollywood, in order to appease the clumsy racism connotations. A bizarre and uneven disaster movie, though not without a certain 70s charm.