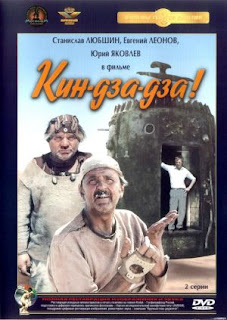 Moscow. Construction manager Vladimir and violinist Gedevan meet a man on the street who asks them what galaxy he is on because he got lost. Thinking he is joking, Vladimir presses the button on the man's remote control - and is teleported together with Gedevan to a desert planet Plyuk in galaxy Kin-dza-dza. The two Earthlings thus start their quest to find a way back home. They meet Uef and Bi, two humanoid aliens in a flying pot who explain them that matches are very valuable here and that the society is divided to the upper class (chatlanians) and the lower class (patsaks). After numerous misadventures, including playing a violine in order to earn some cash, Vladimir and Gedevan are returned back in time to Moscow. Their memories are erased, but they recognize each other on the street when they perform a ritual from Plyuk.

Even though it enjoys a cult status in some circles, Georgiy Daneliya's science-fiction satire "Kin-dza-dza!" is a massively overhyped, overlong and overbearing film that seems like a Monty Python sketch on hold, a bizarre patchwork with long pauses between jokes, unless you think that people wearing bells under their nose or constantly saying "koo" is something very funny. The movie has a great opening sequence: two ordinary people, Vladimir and Gedevan, meet a man on the streets who claims he can travel to another galaxy thanks to a remote control. Thinking he is joking, Vladimir presses the button - and in the next scene, he and Gedevan are in the middle of the desert planet Plyuk, reminiscent of "Mad Max" and "Dune". Unfortunately, the movie does not go anywhere in particular after that, instead just presenting random bizarre people and cyberpunk technology in the desert, aggravated further by sometimes confusing editing or stale music. However, there is one aspect where the story truly gains some momentum: in the satirical views on the  society on Plyuk, that mirrors our own division between the upper class (bourgeoisie) and lower class (proletariat) in such scenes as the one where the people who wear yellow pants are treated with the ultimate respect, which some have interpreted as clothes from certain brands, like Gucci, that symbolize the status in society. This culminates in the best joke, where Bi rebels against Gedevan's view because "a society with pants without a difference in colors has no goal". An uneven achievement that would not have been only for certain tastes had it articulated its satire and comedy better.