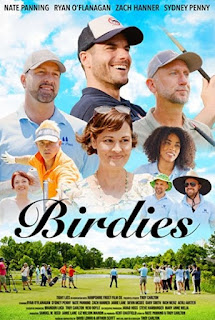 Jake, a cockroach exterminator, loses his job and thus accepts the position of a golfer at the Twin Pines golf club, a derelict establishment run by Conroy. When Jake was in a college golf team, he caused trouble while drunk, which made him quit alcohol and golf, so he is hiding anything golf-related to his girlfriend. When Jarvis, the Head of the rival Magnolia Pointe club, places a bet with Conroy over a golf tournament, Jake is tasked with heading the Twin Pines team “Birdies”. Jake thus enters the match against Adrian of Magnolia Pointe...

Made in the vein of “Caddyshack” and “Happy Gilmore”, independent golf comedy film “Birdies” is a fun little ‘slacker’ flick that has enough wacky humor to fill out its running time. It has crassness, yet it luckily avoids vulgarity. However, it charms more with the enthusiasm of its actors than with actually successful jokes they should be transmitting: the humor is good to lukewarm, but it lacks a truly hilarious sequence that would stand out in the film. Rather, its humor is in the package of numerous little chuckles and giggles dispersed throughout. Adrien, the rival from the Magnolia Pointe club, played by the very energetic and enthusiastic Jamie Lane, is the highlight of the movie, and steals every scene he is in. In one sequence, he storms the Twin Pines facility with his two assistants and then proceeds to make fun of protagonist Jake and the Twin Pines staff. After a heated argument, Adrien turns to his two assistants and says: “Hold me back!”, as they place their arms over him, and then he starts jumping angrily: “Hey, man, you’re lucky they are holding me back, bro!” Afterwards, he again turns to Jake and shouts: “I promise you Baxter, I am a huge asshole!”, as Jake replies: “Why are you bragging about that?!” Here and there, certain snappy dialogues are bound to cause a chuckle, proving that with a little effort, the screenwriters can come up with clever jokes (“I am Pansexual”. - “What does that mean? You have sex with cookware?”). For the most part, they settle for low-brow humor that is accessible, and it mostly works (when Conroy is given his mobile phone in the hospital, he admits to his assistant he will just be using it for porn, as he types in aloud: “Grandma goes wild...”), displaying the old rule that the viewers root for the underdogs trying to prove themselves against the snobby villains. A big problem is that the tournament in the finale lacks jokes, since it seems the movie ran out of punchnlines in the last 15-20 minutes, settling for a standard sports contest. Despite its omissions and lukewarm moments at time, it doesn’t matter, since the only thing that matters here is just the way it makes you feel: it is a ‘hangout’ film that has a positive vibe thanks to the easily relatable characters. 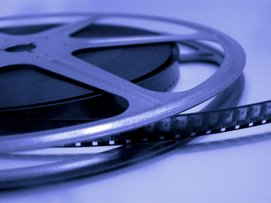