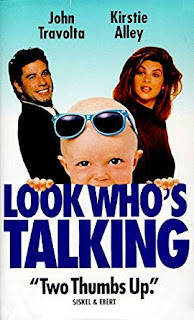 New York. Molly has an affair with Albert, a married man, and ends up pregnant. Since he refuses to leave his wife, Molly has to give birth and raise to her baby Mikey all alone. Her only support is James, a taxi driver who drove her to the hospital and remained her friend. Molly dates other men while James babysits Mikey. When Mikey gets lost and ends up in the traffic on the alley, James and Molly rescue him and become a couple. Molly gets pregnant again and gives birth to Julie.

There has probably rarely been such a cringeworthy and infamous intro to a movie during the entire 80s as in "Look Who's Talking" in which hundreds of sperms are racing to an ovum in tune to The Beach Boys' song "I Get Around", equipped with voice over of teenage cheers. Such is the beginning of Amy Heckerling's semi-autobiographical comedy about the women's biological clock and problems of single parenthood, which is honest and thus the movie has some traces of charm and humor—which are then ruined with lame caricatures and misguided ideas. The most pointless ideas revolve around Molly's fantasies: in the worst, she imagines that Albert tells her he will "explode" unless he kisses her, and then his head explodes (!), which is such an obvious revenge urge of the director who had a fling with a real life filmmaker to get pregnant, and now searches for a scapegoat. Another unnecessary idea was to have babies "speak" in voice over, thereby having Bruce Willis "dub" baby Mikey, but such wisecracking lines rarely get to somewhere more than Mikey commenting how he wants breakfast while watching the cleavage of a woman. A rare exception that proves otherwise is a scene in the park, where a baby girl is moving her lips as if she really is talking, which is sympathetic. This makes the movie moderately fun, since its concept is relevant. The two main actors are great, since Kirstie Alley and John Travolta have chemistry and treat the story with much more dignity and emotion than Heckerling herself did.