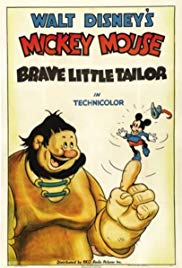 The Middle Ages. A village is desperately seeking someone who will battle a giant. When Mickey Mouse, a tailor, brags about killing seven flies with one blow, the people misinterpret him as if he killed seven giants. Mickey is brought to the king who promises him awards and marriage with his daughter, Minnie, if he kills the giant. Mickey realizes the mistake, but it is too late to withdraw. The giant stumbles upon a farm and sits on a house, accidentally picking up Mickey when he rolled a haystack into a cigarette. Mickey hides inside the giants sleeve, and ties him up. The giant falls unconscious, and is assigned to power a windmill with his snore for an amusement park serving Mickey, Minnie and the king.

An excellent animated short, this is one of the most famous and creative films featuring Mickey Mouse (voiced here by Walt Disney himself!) in his early cinema days, cleverly playing with the notion of the small title protagonist who has to battle a giant. This simple, accessible, fun, yet also surprisingly witty story rises to the occasion, exploiting its possibilities to the fullest given its short running time of 8 minutes. "Brave Little Tailor" is mostly remembered for the finale, which is its highlight, featuring several (humorous) epic wide shots of the giant: from the scene of him sitting on a house; Mickey trying to get out of the giant's mouth; the giant taking a haystack to fold a cigarette for himself up to the elaborate, inspired sequence of Mickey hiding inside the giant's sleeve, and then quickly using his tailor skills to "patch up" the sleeve and capture the giant's left hand while trying to grab the mouse in the sleeve of his right hand. While the ending and the conclusion are somewhat rushed and "abrupt", "Tailor" is still a remarkably ambitious and 'bigger-than-life' take on a simple little story about bravery.