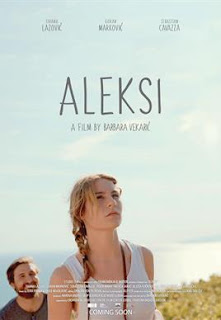 Pelješac peninsula. Aleksi (28) returns to her parent's home after failing to find a job as a photographer. Her parents would love her to take over their vine business, but she wants to apply to work in Berlin. After she is rejected by the Berlin company, Aleksi starts an affair with the divorced Toni, who is 20 years older than her; then with a local musician, Goran; whereas she also flirts with Christian, an American tourist. When Goran finds out that she is also seeing other men, he leaves her. Aleksi asks Toni if she can move with him to Paris, but he rejects her.

Barbara Vekaric's feature length debut is a restless portrait of a young generation who don't know what to do with their lives, think only about themselves and lack any accountability. Refusing to fall prey to typical cliches of the social drama genre, "Aleksi" nonetheless feels strangely vague and aimless in its episodic storyline, without a clear point as to where it is going. The most was achieved out of the main protagonist, Aleksi (excellent Tihana Lazovic), who is stubbornly immature, but also a very funny and sympathetic character at the same time. She is shown masturbating in her bed or urinating in the bushes, and in the latter sequence the character of Goran urinates on her from a cliff, unaware that she was squatting in the bushes. The film's motivations are inconsistent: for instance, nobody buys that she would all of a sudden kiss Toni, a man with a grey beard, 20 years older than her, and start an affair all out of the blue. However, one can sense these flings are all symbolic for her wishes: Toni is a divorced man with two kids, and thus she subconsciously wants to have kids with him, as well; whereas Goran is the embodiment of her male self, a "wild", carefree musician. The best moment arrives when Goran finally confronts her: "Do you care about me? Then why did you go for me so much if you don't care?" Aleksi doesn't know what to answer. "You know what? You don't know what you want. You are selfish, and use others just to feed your ego." These moments lift the film, which would have benefited from more inspiration and "tighter" writing, since its ending is rather vague and abrupt.