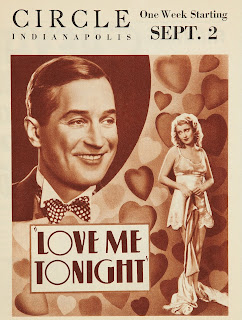 Paris. Maurice is a joyful tailor who finds out that one of his customers, Vicomte, did not pay for all the suits he ordered from his shop. Maurice thus decides to travel to Vicomte's castle to demands money from him. However, on his way, Maurice meets Princess Jeanette, and falls in love with her. Once in the castle, Vicomte informs Maurice that Vicomte's rich uncle limited him allowance, and thus he cannot pay the tailor. However, Vicomte introduces Maurice as a Baron so that he can stay in the castle until he can get paid. Maurice accepts to play a Baron to try to charm Jeanette. The Princess indeed falls in love with him, but abandons him when everyone finds out Maurice is just an "ordinary" tailor. However, in a change of heart, Jeanette rides on a horse and stops the train with Maurice on it. The couple is thus united.

One of the most critically recognized musicals of its time, "Love Me Tonight" stood the test of time and became a classic due to its playful, creative and energetic approach, which makes it seem remarkably fresh even by today's standards. Director Rouben Mamoulian takes on the typical story of an "ordinary" man of "lower class" who falls in love with a Princess in a castle, a woman "above his league", and yet still manages to turn it into something unique and untypical thanks to his sense for quirky comedy and wonderful, warm characters who inhabit this semi-fairy tale like world. Already the opening of the movie is very catchy: it shows a deserted Paris at sunrise, and quickly uses the sounds of a man with a pickle hitting the ground, a man snoring, a woman sweeping the floor with a broom, a chimney, a clock and other drumming to combine them all into one giant rhythmic semi-music. Another highlight is the inventive use of singing: tailor Maurice sings the song "Isn't It Romantic?" at his store, only for another man to continue singing it in a cab, then the soldiers taking over the singing while they march in the field, and musicians continuing singing it at night, until the song finally reaches Princess Jeanette at her castle, thereby establishing a link of the main male and female protagonist, who will soon meet in the story. A couple of dialogues are equally as fun (when Jeanette wants to leave, after she fell from her horse and strained her foot, Maurice tells her: "Your left foot wants to go, but your other foot wants to stay."), whereas Mamoulian tickles and pushes the envelope of censorship with a few of "spicy" pre-Code moments here and there (such as implying that Jeanette is sick because she doesn't have a lover). While some of the moments are a tad stiff at times, and not all of the musical numbers equally as fun, "Love Me Tonight" still manages that all the flaws take a back seat in front of all the virtues that take on the lead.