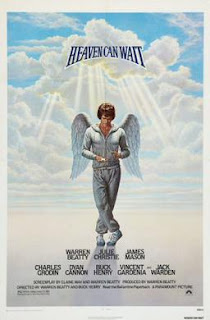 Los Angeles. Joe is a football player who still waits for his big break, but his trainer, Max, believes in him. While riding on a bicycle, Joe gets hits by a truck and dies, but there has been a mix-up, since Heaven intended him to die in 2025. Therefore, angel Jordan sends Joe's soul back on Earth, into the body of rich energy industrialist Farnsworth, who was poisoned by his wife Julia and her lover Abbott. Joe instantly falls in love with activist Betty, who came to Farnsworth's mansion asking him to stop a project of an refinery that would displace hundreds of people from a small town. When Joe abides by her wishes, Betty falls in love with him. Joe also contacts Max and manages to persuade him that his soul came back in Farnsworth's body. However, Abbott manages to shoot and kill Farnsworth, so Joe goes into the body of football player Jarrett to win the game. Jordan erases Joe's memory, who becomes Jarrett, but stumbles upon Betty and asks her out for a date.

With "Citizen Kane", O. Welles set a precedent by getting nominated four times for a single film (best picture, best actor, best director, best screenwriter), and it took 37 years until this feat was repeated by Warren Beatty in his fantasy comedy of mistaken identity "Heaven Can Wait", a remake of the beloved film "Here Comes Mr. Jordan". Unfortunately, the merits of Welles for "Kane" are far superior and contain a more enduring value than Beatty's for "Heaven Can Wait", which failed to reach that status of a classic with time. This film is one of the more unusual ones of the decade because it seems so out of place for its time: it is so safe and old fashioned it seems more as if it came from the 50s, and not from the "wild" 70s. It is a good movie, yet the directors and screenwriters needed more than triple of the amount of inspiration and ingenuity to properly sell such an outlandish concept. The sequence of the plane in the clouds that transports souls seems very kitschy today, whereas several other moments haven't aged that well, either, due to their sometimes corny humor without a true comic timing. For instance, Julia and her lover, Abbott, tried to poison her husband, Farnsworth, and thus it seems illogical that Joe, who is now in Farnsworth's body, would simply ignore them and their future assassination attempts, and do nothing about them, instead focusing on assembling a football team, as if that is of no concern to him. Some of the better jokes are found in this second act, though, when Julia and Abbott are never quite sure if Farnsworth is toying with them or if he simply lost his mind: in one scene, Julia is in the hallway and takes a drink to calm herself, but as soon as Farnsworth/Joe passes by her, casually asking how she's doing, she drops the glass on the floor from shock. The love story between Joe and Betty is the strongest point of the film: there is something in that scene where they are in his car, but he constantly takes away his look from her, until he confesses: "I just cannot help but to stare at you". The unusual, but tragic-lyrical ending gives some weight to the story as well. While too simplistic at times, the movie is still charming and neat to watch.